A graduate student at Pennsylvania State University has built a robot which can track and shoot targets automatically. Of course, it won’t fire real bullets, instead nerf bullets at the target. The project has been developed for the final project of  a course on Advanced  Mechatronics at Penn State. The student said that the design is inspired by the murderous turrets in the game Portal. 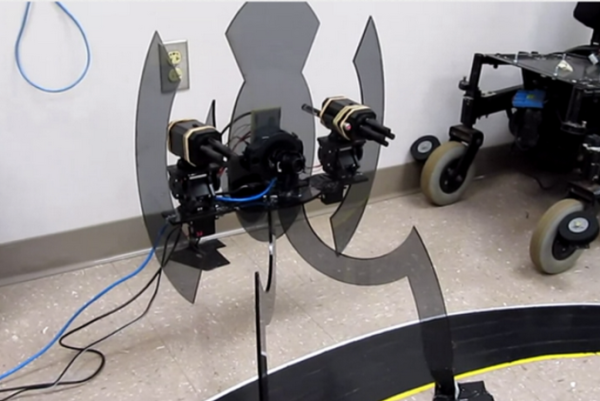 The robot is the skeleton of a turret from the game Portal. It is equipped with an IP webcam in the middle and two servo mounts with Nerf guns attached to both sides. The programming is done with MATLAB and Arduino. The camera reads RGB colors and then connects to a computer running MATLAB. As soon as the camera tracks and identifies the target, it fires nerf bullets at the target.

Bravo Robot : A Real-Life Transformer Which Will Blow Your…

Designers have also instilled treachery into the automaton. When a target is detected, but out of range, the robot invites the target saying,”Will you come over… here?”. If target complies, the robot starts shooting.

The designer has posted a video of depicting how the robot works on YouTube under the gaming category. Thank God! A treacherous robot with automatic targeting and shooting capability could have been deadly.

The designer acknowledged that the design still needs some work. He hopes to  improve the underlying software and molding a shell soon.

Rockstar Rolls Out The Launch Trailer Of Max Payne 3

Video Of Romeo Robot Released For The First Time