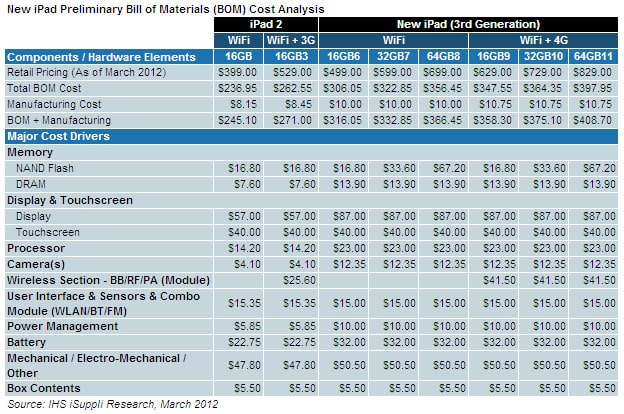 Conventionally, Apple’s production costs are significantly lower than the price at which its products are actually sold, which explains the huge profits the company makes every quarter. With the new iPad, however, it has been revealed that Apple’s production costs has been rather high, leaving the company with low profit margins on the sales. The new iPad cost Apple some $316 at least to build whereas the price of the tablet is the same as iPad 2. Apple has a policy of keepings its costs rather consistent with the launch of newer devices. However, every new device features a better, and most often pricier, product. Naturally, this results in a cut in the per sale profits for Apple.

But we think that Apple is banking upon its ability to boast its sales with every new product. For instance, Apple is definitely hopeful, and analysts well agree, that it may be able to sell third-generation units lot more than it sold iPad 2. So even with lower profit margins, Apple will be able to outdo what it made from iPad 2.

The priciest components for the current iPad come from Samsung who gets about $87 for the display and $23 for the A5X processor. This is approximately 30.2 percent of the overall bill of materials of a 32GB New iPad.

Still, Apple is able to reduce its costs significantly by designing a lot of its components on its own. For instance, the A5X processor has originally been designed by Apple and so, the intellectual property rights of the processor stay with Apple. And due to this, Samsung doesn’t charge Apple as much as an independent chip-maker would.

NAND flash memory still stays Apple’s prime profit-generator in its products. It was earlier revealed that Apple is able to charge customers up to ten times the price it actually gets NAND for. According to an analyst, “The NAND flash memory is one of the key profit-generating components for Apple in the new iPad line, as it has been in previous iPads and in the iPhone family. Apple makes far and away more money in selling consumers NAND flash than NAND flash manufacturers make selling it to Apple. And the more flash in the iPad, the higher the profit margin there is for Apple.”