CIO has reported that AT&T is set to sell its own version of the forthcoming RIM Playbook tablet after the launch of the Wi-Fi only version this spring before the launch of the already confirmed Sprint version with 4G WiMax support this summer, placing the AT&T release between March and April. 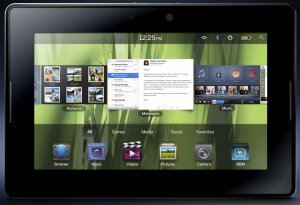 A high-level BlackBerry administrator who works closely with Research In Motion (RIM) and who wishes to remain anonymous due to a non-disclosure agreement, a cell-enabled (3G) PlayBook is expected be available in late March or early April. The source also says he expects an LTE PlayBook “some time soon” after the release of the 3G PlayBook.

The RIM Playbook will be the first tablet from the Canadian manufacturer with a new QNX-based operating system with support for Flash and utilize the BlackBerry as a bridge for additional functioonality.

Apple’s Rumored ‘iPad Mini’ May Be Wi-Fi Only