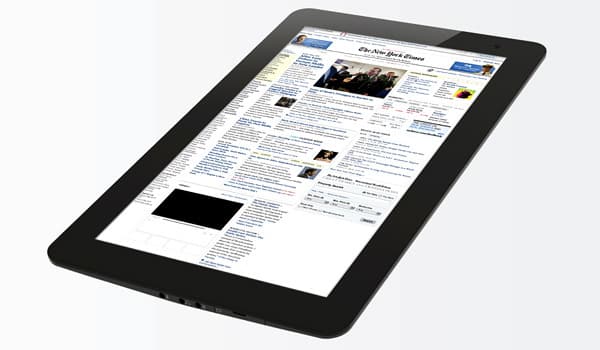 Previously known as the Crunchpad, JooJoo is among the first of many Web-surfing tablet computers due in the next year. JooJoo’s video applications, such as for Hulu and YouTube, are most hotly anticipated, but manufacturer Fusion Garage says the tablet will also function as an e-book reader.Let’s see Fusion Garage e-book reader…..

There’s a part of us that really hoped the JooJoo tablet would be the iPad-killer it was hyped to be. To be fair, things get off to a pretty good start with the gorgeous hardware.It’s fair to say that, design wise, the JooJoo is every-bit as attractive as the iPad, with its glossy black bezel and sculptured back. On first glance many people the office actually though that the JooJoo was an iPad, which is a high compliment indeed.

The JooJoo, Fusion Garage’s new tablet is gunning for the iPad. Its 12.1in capacitive touchscreen gives it the jump on its Apple rival, which ‘only’ has a 9.7in display, and unlike Jobs and co’s gadget, the JooJoo features Flash support – for a, theoretically, more complete web browsing experience.

It’s no feather, though. Behind the screen lies a 1.6GHz Atom processor, Nvidia Ion graphics and 4GB SSD, all encased in a tapered body. The result is a JooJoo that’s nearly 19mm thick and weighs just over a kilo, despite plastic construction. Its elongated form may not fit comfortably in your manbag, either.

Turning it on initially had us impressed, with a fancy home screen that displays a list of what appear to be apps, such as for Facebook, Twitter and YouTube. However, these aren’t Apps, but are rather icons that take you to the corresponding web page.

The JooJoo keeps things simple with just one button (for power on/off), so navigating the web is a mix of typing into the onscreen Qwerty and jabbing at links. You can drag the keyboard around and switch between a large, two-handed OSK (onscreen keyboard) or a smaller version.

It’s worth knowing that the JooJoo has no media player software installed, so you’re left with streaming sites for music and vids. That’s not entirely a bad thing – there’s a wealth of online entertainment, from amateur bands on MySpace to the Beeb’s iPlayer. Sadly, the JooJoo struggled to render HD streaming from the latter and sound is muddy. The silver lining: Fusion Garage tells us video playback from USB is coming.

You see, for the JooJoo, Fusion Garage decided that there would be no Apps and that everything you view would be downloaded from the internet. So, in many ways the JooJoo is actually just a web browser. With Flash support it would appear, on a first glance, to be a great device for browsing the internet.

My Brush for iPad – Premium Paint And Drawing App[FREE]