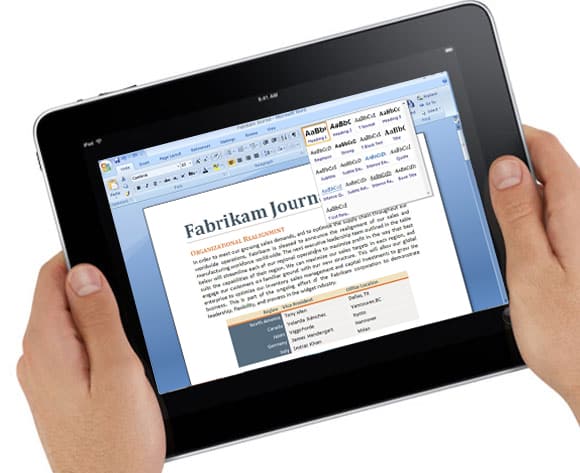 Microsoft released Office for iPhone after a lot of rumors and speculation, leaving iPad users a tad bit disappointed. But the company had been working on an iPad version and reports have it that Office will land on iPad before July this year. It would seem that originally, Microsoft had no plans of working on an Office for iPad. Instead, the company simply dished out Office Web apps and iPad users were asked to download and install these apps if they wanted to have Office features on an iOS slate.

But the company eventually decided for an iPad version and has been working on it. Microsoft is now poised to ship out its touch-optimized Office for Windows 8 soon, the first version of its kind. But the company may release Office for iPad even before that.

It’s certainly baffling to try to figure out exactly why Microsoft hasn’t already released an iPad version of the Office. This software suite is immensely popular across users of all platforms and ages and Microsoft could have gained a solid presence on the iOS platform by dishing out Office for iPad. Rather, the company’s executives balked and delayed the whole thing without any discernible rational reason.

So what is expected in a possible Office for iPad? Like Office for iPhone, Microsoft will pack only basic functionality into such a version, tying it tightly with its Office 365 subscription. The company has been trying to push its 365 subscription model across all users and when Office lands on iPad, users will have to be a part of that ecosystem.