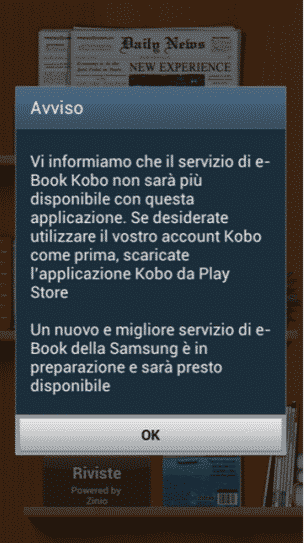 The Digital Reader has reported that some users of Samsung Android devices in Europe are getting a warning message when they open Samsung’s own e-reader app. The warning informs users that they need to download Kobo’s app from the Google Play store if they want to continue reading the eBooks that they purchased for use in Samsung’s e-reader app. Kobo has provided the ebooks and back-end transaction services for Samsung in Europe. But, the present situation indicates that deal is coming to an end. When Kobo and Samsung originally struck their deal, Kobo only had black & white hardware e-readers, but it’s now competing with Samsung with its Vox Android tablet. But now, Samsung may have decided that it doesn’t want to funnel revenue to a competitor. There are many alternative vendors that Samsung could work with. On the other side, Samsung has confirmed that they are going to release its own “new and improved” e-reader service soon, putting an end to its relationship with Kobo.