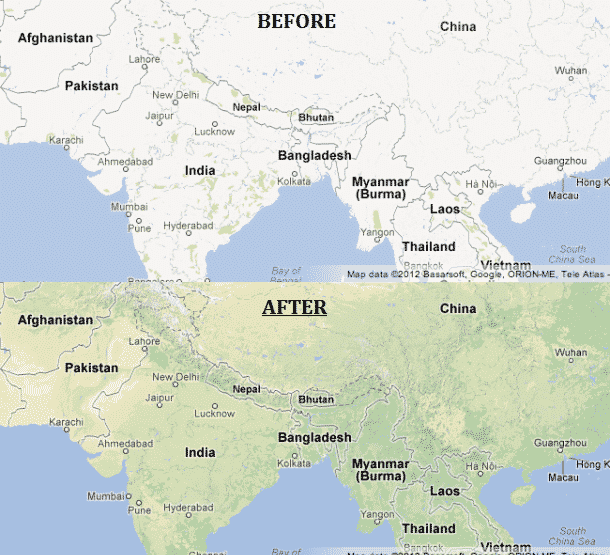 Google is consistently hunting for ways to better improve their maps program — and they’ve just took another huge leap by adding an array of visual improvements to maps. Right before Google updated maps, many countries featured blank white terrain when countries were viewed from above, now they’ve taken a step forward by adding visuals — such as the deserts and green-ish colors for the forests. With Google’s update, maps clearly visualizes terrain, color gradations (to show vegetation), and labels for certain land formations. It’s now much easier to depict where forests, deserts, and mountains are located. The photograph above shows a major difference between Southern Asia’s maps before and after.

The Google Maps blog also pointed out the terrain in Vancouver, Canada, which has since gained visualizations of the Rocky Mountains. Karl Schmidt from the maps blog said, “We hope this new visual information literally provides you with a more comprehensive and accurate lay of the land, and comes in handy whether you’re planning a trip or just browsing the map.”

Google Maps has been working hard at updating its platform lately — just a few weeks ago they even added around 250,000 more street view miles. The team is also working hard to create an iOS application for Google Maps.