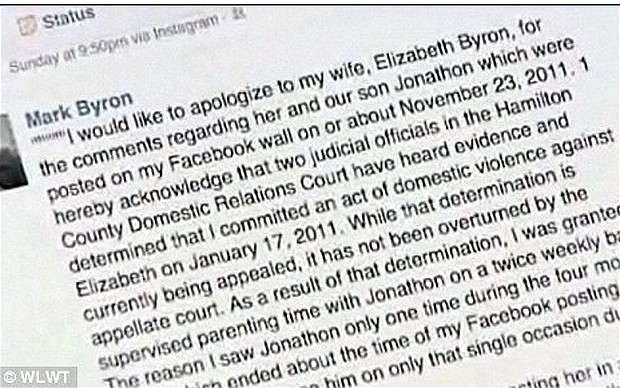 Most users take things seriously on Facebook, hence be careful about what you say to another. They might actually take it as if you have said those words for real face-to-face. A recent case happened to remind us all that things are for real on Facebook. A man, named Mark Byron, was ordered by a judge in Cincinnati to appologise to his estranged wife, named Elizabeth, when he posted a comment on Facebook which she found offending. The incident took place sometime around the end of 2011, and now ruling on the case has come out. The man was also found guilty of civil domestic violence against his estranged wife according to a report in Cincinnati NBC. “If you are an evil, vindictive woman who wants to ruin your husband’s life and take your son’s father away from him completely—all you need to do is say that you’re scared of your husband or domestic partner and they’ll take him away!”

Although despite writing this comment Byron did not want his wife to read it, hence she was blocked, but somehow she read the comment. The authorities took his words to be a violation of a temporary protection order and considered it as a harassment of the child. He was sentenced to 60 days in jail and was fined $500. The judge asked him to post an apology on Facebook itself if he wants to avoid serving his sentence and paying the fine. He was asked to strictly not remove his apology post on Facebook for at least next 30 days and he makes sure he does not cheat, he was ordered not to close down his Facebook account. The next hearing of the case is on March 19.

Now this may seem like a strange case, for one that someone could take one’s venting to an estranged wife too seriously and then get a court sentence on it. And on top of it all, in a Facebook way, give an apology. It seems like for some Facebook has turned out to be a battleground. Users often tend to go online using social media for this very reason of the freedom they get to vent their feelings. Now to be held accountable for such a thing is a far-fetched thought that many who write might not consider. It is strange to think that Facebook comments can go that far in a relationship.