Apple has now completed the roll-out for social network integration across its online store, allowing shoppers to share every single one of the store’s products on Facebook and Twitter, the feature was first introduced last month and allowed customers to share a limited number of Apple products with their friends via the most popular social networks. The feature has spread across the whole of the Apple online store and you can access the links in the same way you’d usually save a product for purchasing later……………….. 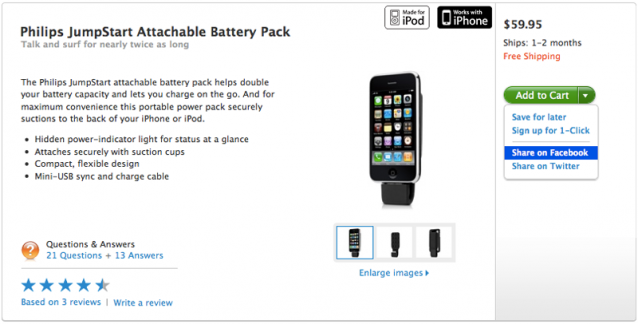 Links to share products on social networking sites Facebook and Twitter are now available for all items sold in Apple‘s online store, including third-party products and the gradual roll-out of the social networking features began last month, but was initially limited to only a handful of Apple-specific products and now all products in Apple‘s online store now sport links to Facebook and Twitter. Users can share products with their friends on the popular social networking sites and just browse the store for a product you would like to share, click the right side of either the Select button or the big green Add To Cart button and then choose Twitter or Facebook to share. Choosing to share a link on Twitter opens a window pre-populated with the name of the product and a link to the Apple online store. For Facebook, a window opens and users can post a thumbnail and a link to the product via their account. The enhancements to Apple’s online store are another way that the company has chosen to embrace social networking. The iPhone maker will also add system-wide Twitter integration to iOS 5 this fall, while videos of an alleged iPhone prototype suggest the company also looked into Facebook integration at the system level. 9to5mac.com, noticed that the various sections of Apple’s support site have been unavailable since yesterday, including the Repair Status, Product Registration and Service & Support Coverage tools. These outages might not be related to store-wide social sharing that has been live for hours. Perhaps those sections are dead as a result of a maintenance upgrade. Another possible explanation is that Apple is revamping those ahead of iPhone 5 launch, which now looks increasingly due in early October.

iPhone 5 Is In Production