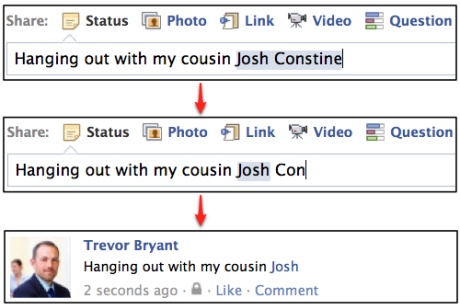 Facebook now allows shortened name tags and improves friend tagging: optional @ symbol, tag shortening.Just start typing the first few letters of a friend’s name with the first name capitalized and if Facebook recognizes it, a drop down menu will appear and users will need to type five or more characters of a friend’s name for the menu to appear………… Facebook has made two improvements to its @ Mentions feature when tagging friends and it first allows you to tag a friend without first typing the @ symbol and the second allows you to shorten a friend tag.This week there were two worth surfacing: hiding the recent activity field and shortening tags in status updates, the recent activity allows users to hide their comments, actions, likes and shares from other users.Users can choose to no longer announce their every move with one click of a FB button and previously, you had to input the @ symbol and then type out your Facebook friend’s name to tag them. Now, the automatic friend tag suggestion feature will activate when you type out a friend’s name starting with a capital letter. Facebook started testing this feature in August 2010, but the feature annoyed users who weren’t trying to tag a friend. The feature has since been tweaked: tag suggestions are only shown when you type five or more characters of a friend’s name, or type a whole name that is less than five characters.

Previously, you had to leave your friend’s full name or it wouldn’t appear as a tag and trigger a notification for them. Now, after you’ve tagged a friend in a post or comment, you can then shorten it by deleting the beginning or end of your friend’s name. The remaining part of the name will still be highlighted and will show up as a link once the post is published. Tag shortening should prevent overly formal tags appearing in informal posts or comments.It’s worth noting that both these features are for tagging friends. Tags of Pages, Events, Groups and other Facebook properties still require the @ symbol to be taggged, and cannot be shortened once tagged.For those new to tagging on Facebook, it’s worth mentioning that the @ symbol does not remain part of your post; it is merely the syntax that invokes the tagging feature itself. Instead, your post simply gets a link to the relevant page on Facebook.In September 2009, Facebook extended its tagging feature from photos to Friends, Pages, Events, Groups and so on. In March 2011, Facebook enabled tagging in comments. Interestingly, the Facebook for Android app allows users to tag friends in posts, but the option isn’t yet available on other mobile apps or on m.facebook.com.

Facebook To Launch An “Edit” Feature To The ‘Look Back’

What is GitHub And How Is It Significant?