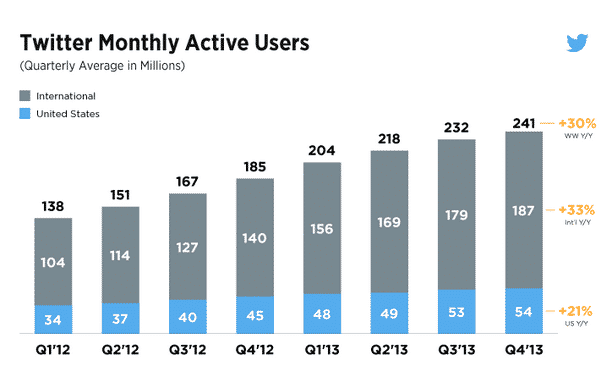 Twitter has been registering a steady growth ever since it came into being. And when it went public, it did far better than most Wall Street estimates. But during the Q4 of 2013, Twitter’s user growth rate has slowed down. Twitter decided to go public in November. The IPO was a huge success for the company and its stock continued to rise as it rolled out new services and features. The total revenue that Twitter has brought home during the year 2013 is $665 million. This is a huge year-over-year gain, compared to the total revenue in 2012.

However, there are a few things which are causing concern among Twitter’s investors. The primary among them is the slowing growth rate of the company. According to the numbers crunched by Twitter itself, it has added a mere nine million new monthly active users during the December quarter. That is a substantial number but that indicates a significant decline in the growth rate of the user base.

The chart posted above illustrates the case. At the same time, Twitter’s Timeline views have also declined. This is a primary metric used by the company to measure user engagement. The company’s CEO Dick Costolo says that since Twitter has rolled out threaded conversations where people can get all tweets in a single conversation with one click, a decline in Timeline views is understandable. When talking about quarter-over-quarter growth, Twitter certainly seems to have lost some pace. But will Costolo and his team be able to revive Twitter’s growth in 2014, remains to be seen.