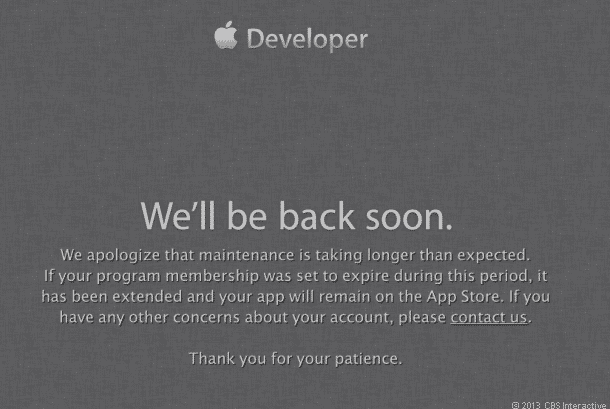 For the last two days, Apple’s developer site has been down. At first Apple mentioned that the site was down due to “maintenance” purpose and will be “back soon.” But now Apple has confirmed that its developer center has been hacked and still the site is down. Some developers reported that they had received password reset e-mails from Apple. According to Apple, the company didn’t send any email like that. This simply just rang the bell, and Apple shut down its developer center website temporarily in hope that it would fix the problem in no time. When investigating, Apple found that its developer center had been breached by “an intruder” who attempted to access personal information from its registered developers. Apple has confirmed that customer information and app code has not been compromised during the attack as “sensitive personal information was encrypted and cannot be accessed.” But Apple is not sure whether or not some developers’ names, mailing address and/or email addresses may have been accessed.

However, Apple has taken the security breach very seriously and has said that it will be “completely overhauling” its website, including its developer systems, server software, and database in order to prevent future incursions of such breaches.

Source: Apple
Thanks To: The Verge