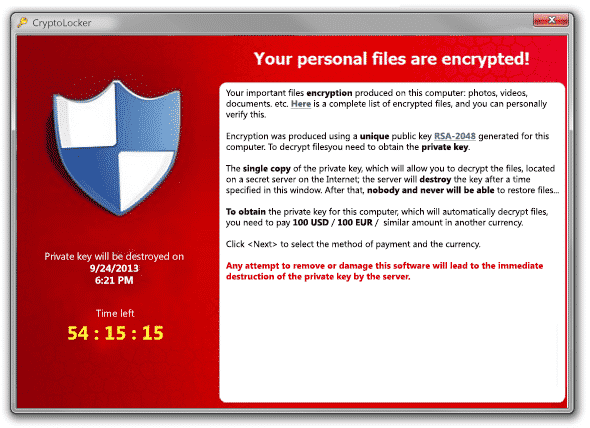 Ransomware are a particularly nefarious form of malware. These software lock or encrypt the victim’s files and then demand ransom to resume access to it. UK’s National Crime Agency has now revealed that a mass ransomware spam campaign has been launched to target 10 million UK users with the Cryptolocker malware. According to NCA, the Cryptolocker ransomware is being spread through mass spam emails. These emails typically contain an attachment which may appear like a voicemail or an invoice but is actually the malware. As soon as a user clicks on the attachment, the malware is downloaded to the system and immediately encrypts the files stored on it.

The user is then presented with a screen which asks him to pay up 2 bitcoins as ransom. In return, the user is promised that he will be able to access his files normally. Currently, one bitcoin equals more than £250, which means that the total ransom demanded from victims of Cryptolocker exceeds £500.

The motive of the people who have launched this nefarious campaign is purely monetary. This is evident from the fact that the key target of Cryptolocker-infested spam emails are individuals who work at or with banks or any other financial institutions.

For now, NCA hasn’t been able to identify the people behind this spam. Between Oct 27 and Nov 4 alone, the malware has been able to infect more than 12,000 computers. Authorities have warned the users that they shouldn’t click on any suspicious attachments and should not pay ransom if they end up installing Cryptolocker. Another useful tip is to keep a backup of all important data on an external storage drive.

Moreover, if the malware has encrypted the data of any UK users, they are advised to reach out to the authorities through http://www.actionfraud.police.uk/