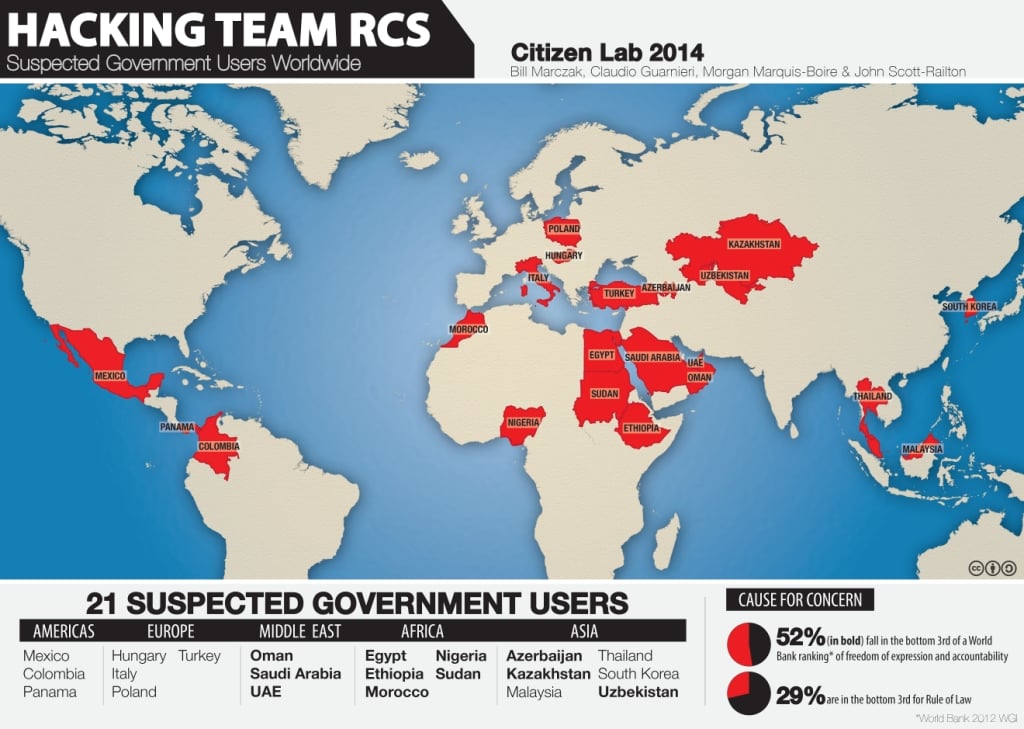 Citizen Lab recently published a damning report, citing that the spyware by Hacking Team is being used by a number of oppressive regimes around the globe. The surveillance-technology company has now denied this. Hacking Team specializes in creating power surveillance software called ‘Remote Control System‘ (RCS). This spyware allows anyone to intercept all forms of communications on a target computer and access data stored in it. A recent report by Citizen Lab claims that Hacking Team’s software is being used by countries such as Saudi Arabia, Sudan and Azerbaijan.

It is important to note here that Hacking Team sells its spyware only to governments and law-enforcement agencies. However, the company has never disclosed the list of its clients and although refuting the claims made in the Citizen Lab report, it refused to divulge any details of its sales.

One of the key features of RCS, Hacking Team claims, is that it can’t be traced. Citizen Lab also challenges this by citing that it was able to map RCS proxy servers in a number of countries around the globe. In response to the allegations, a spokesperson for Hacking Team, Eric Rabe, has responded with the following statement, “Citizen Lab appears to be using research based on old technology, and the list they have produced is not an accurate list of nations where Hacking Team clients are located.”

He further asserted that Hacking Team follows a very detailed procedure of evaluating potential clients before providing them with the spyware. In doing so, the company makes sure that such regimes which are involved in human rights abuses don’t get their hands on it, Rabe claimed. He further said that an independent panel of ‘technical experts and legal advisors’ reviews all potential sales.

But he stops short of providing details of who these panelists are, how are they chosen, what regimes currently use the RCS spyware and other critical questions. These statement are directly confronted by many recent instances where RCS was reportedly used against Sudanese reports as well as journalists in U.S. and Europe.

Despite an elaborate email correspondence with Rabe, tech analysts have been able to recover nothing but empty policy statements. Rabe does not provide any concrete evidence to contradict Citizen Lab’s report, which is typical of the surveillance companies providing regimes with surveillance software. It is about time that these companies are held accountable and stopped from providing abusive regimes with tools to persecute and target dissidents.

Get To Know The Sites Tracking You Through “Collusion For Chrome”