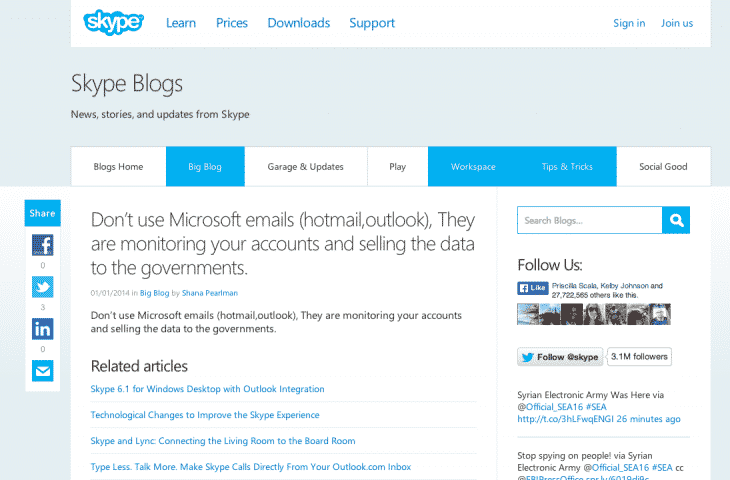 The Syrian Electronic Army (SEA) has decided to celebrate the new year with a solid dose of hacking. The pro-Assad group recently gained control of Skype‘s social media accounts, demanding an end to online spying. It is rather unusual for SEA to pull off such a stunt. In the past, the group has launched many online attacks and hacked many sites, but all those endeavors had been to propagate a pro-Assad stance. On the other hand, this fresh episode of hacking is purely meant to highlight online surveillance. SEA apparently gained control of Skype’s Twitter and Facebook accounts as well as its blogs page. On Twitter, the group tweeted, “Stop spying on people. via Syrian Electronic Army’ while it also posted a Facebook update on Skype’s official page which read, ‘Don’t use Microsoft emails (hotmail, outlook). They are monitoring your accounts and selling it to the governments. More details soon. #SEA.’

Similar statements were posted on Skype blogs too. However, Skype was quick to respond to this security compromise and regained control of its online accounts. A Skype spokesperson then issued a statement, “We recently became aware of a targeted cyber attack that led to access to Skype’s social media properties, but these credentials were quickly reset. No user information was compromised.”

The episode has put into question Skype and Microsoft‘s collusion with the likes of NSA, yet again. In the past too, Microsoft has been blamed of leaking backdoor exploits for Skype to the agency. One can’t dismiss this allegation too quickly, given that despite Skype’s claims that it can’t be wiretapped, NSA has been tapping into Skype-based communications for a long time now.