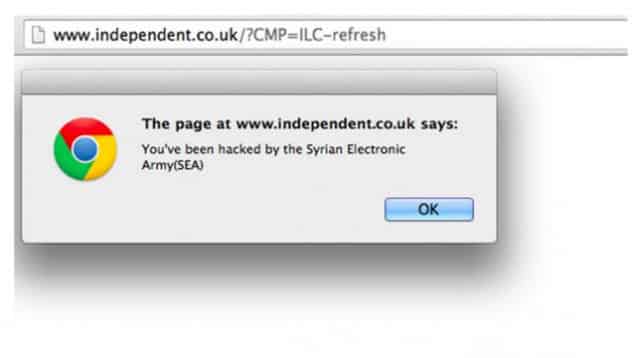 Until now, Syrian Electronic Army (SEA), a pro-hacker group, has hacked many websites, user’s/company’s social media accounts and so on. These hack includes Microsoft News’ Twitter account, official Facebook and Twitter account of Skype, Time’s Twitter account, site of US Marines and so many. The latest news is now SEA has hacked a number of major UK-based media websites. Among these hacked UK-based media websites, there are some renowned and popular websites like The Forbes, The Independent, The Chicago Tribune, The Daily Telegraph, The London Evening Standard, broadcaster CNBC, PC World and the US National Hockey League. The SEA targeted third-party widgets and by using them, they have hacked the aforementioned websites. Here’s the list of websites that’s been hacked by SEA. It’s been reported that the hacker group found a way into registrar GoDaddy to compromise DNS records for the Gigya, a customer identity management platform used by all the sites. However, no site visitors have been affected by the attack. But some visitors using a line of Javascript have been redirected to SEA web pages with the message “You’ve been hacked by the Syrian Electronic Army.” The Telegraph has admitted in a tweet that it has been “compromised” and blamed a “third party” (which is Gigya) widget used by the website.

The SEA posted a message in a group reads, “Happy thanksgiving, hope you didn’t miss us! The press: Please don’t pretend #ISIS are civilians. #SEA.”

On the other hand, Gigya said in a statement, “Some calls to Gigya domains were redirected to the hackers site or showed a hacking message to end users. It might take some time until the changes propagate to all users. We have worked with GoDaddy to resolve the issue and the redirection was removed.”

Source: The Hacker News
Thanks To: Tech Worm