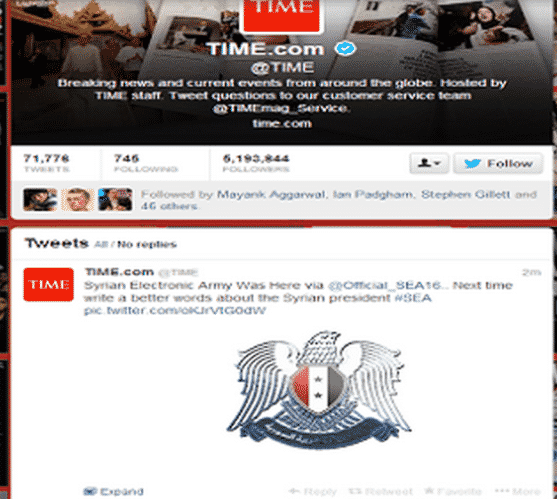 Syrian Electronic Army (SEA) has hacked the websites and accounts of many international media outlets in the recent past. Time magazine is on the list now with SEA having hacked Time’s Twitter account as well as its Person of the Year poll. Usually, SEA responds with a hack if a major media organizations criticizes Syria’s President for being a party to the ongoing bloodshed in the country. Responding to such reports, SEA has hacked BBC, NPR and Al Jazeera in recent months, among others.

In its Time’s Person of the Year poll, the magazine described the Syrian President as, ‘Bashar Assad: Syria’s ruler presided over a bloody year, shrugging off international concerns over the use of chemical weapons as the death toll of his country’s civil war eclipsed 100,000.’

The SEA apparently took offense to this and hacked into the Twitter account of Time magazine. The group then posted from the account, “Syrian Electronic Army’ was here via @Official_SEA16. Next time write a better word about the Syrian president #SEA.”

Reports have it that SEA also shut down Time’s Person of the Year poll. Although numerous publications have cited this, Time magazine is yet to confirm. As far as the Twitter account of the magazine is concerned, screenshots confirm the hacking attempt. SEA’s most hacks have been pulled off through phishing schemes which target one or more individuals working at the given organization. We’re not sure how SEA got its hands on Time’s Twitter credentials. An official statement from Time magazine may shed some light on it.

PRISM Is Not All, NSA Has More – Boundless Informant