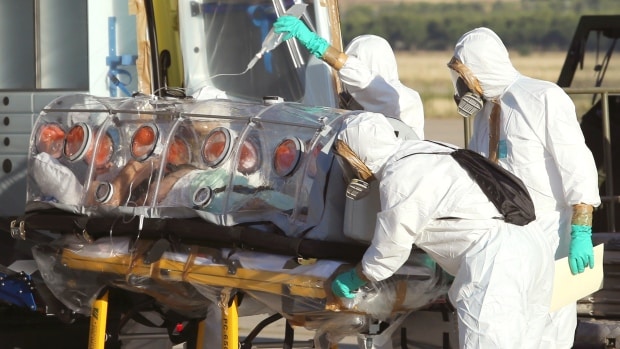 Ebola virus (EBOV) is one of the most fatal viruses in the history. In the past few months, this virus has massively attacked in West Africa and killed lots of people. Gene studies have shown that this virus mutates faster in humans than in animal hosts. Lately, World Health Organization (WHO) has said that by this November, Ebola virus could infect more than 20,000 people in West Africa. The Ebola virus disease (EVD), formally known as Ebola hemorrhagic fever, was first discovered in 1976. The name Ebola was taken from the Ebola River which is located near the village in the Congo. Its symptoms are described as the onset of sudden fever, muscle pain, extreme weakness, sore throat and headache, rash, diarrhea, vomiting, reduced liver and kidney function, and internal and external bleeding in severe cases. On the other hand, a group of researchers has found that the Ebola virus mutates at twice the rate in people than in animal hosts. The Ebola virus disease is highly contagious and is believed to have originated with fruit bats which are considered to be natural hosts for the virus. The bats carry and spread the disease, but are unaffected by it. Transmission has been observed through the handling of infected animals such as chimpanzees, fruit bats and other ill or dead animals found in the wild. Consuming the raw meat of infected animals is another means of transmission. Human-to-human transmission is through the exposure to bodily fluids like sweat, blood, semen, mucous and other secretions. However, the Ebola virus outbreak began in December 2013 in some districts of Guinea. WHO wasn’t notified of the outbreak until March 23, 2014. When WHO looked into the matter, it became thundered. WHO found that the disease has a fatality rate from 50 percent up to 90 percent and there is currently no vaccine or specific treatment. WHO has said that by this November 2, more than 20,000 people in West Africa will be infected by this virus (note that, already more than 4,000 people have been infected by this virus and 2,300 have died of these virus). More sad news is that WHO has estimated that roughly 70 percent of people who are infected now will die.

On the other hand, WHO has also said that it’s crucial to get the infections under control, because “without a more-effective, all-out effort, Ebola could become endemic in West Africa. WHO has published a report in the New England Journal of Medicine. From that report it’s been found that the number of affected people is increasing at a double speed in every 16 days in Guinea, every 24 days in Liberia and every 30 days in Sierra Leone. If the virus is spread at this speed, then it will surely spread to other parts of Africa and beyond.

Source: The Verge
Thanks To: Vox

The Mindset Of Educators Behind Online Education

People Gave Peculiar Answers To A Survey By eBay