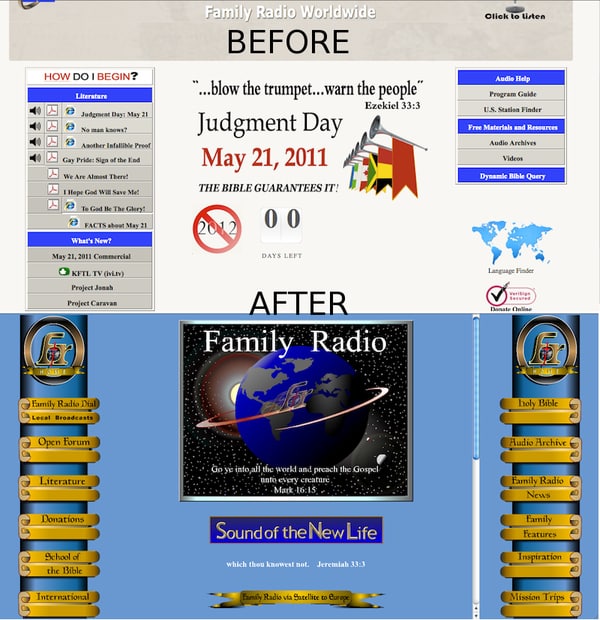 The California doomsday-mongers at Family Radio stripped their website of an apocalypse countdown and the large text declaring Saturday as Judgment Day, it was actually a relatively pleasant day……… For all the hype leading up to this, countless broadcasts and a sprawling nationwide campaign, the airwaves of Christian station Family Radio are oddly silent with May 21, 2011 finally here and Harold Camping, 89, said he was ‘astounded’ when May 21 came and went without the Rapture. But he is already examining new theories… including the possibility that God, being merciful, did not want mankind to suffer for five months and so will end the world all at once on October 21 instead. He also claimed that God did visit Earth on May 21, but that he did so spiritually. Speaking on Family Radio tonight, he said: ‘Last weekend became a very interesting weekend because May 21 came and has gone and all the dire predictions that have been talked about did not come to pass. ‘I can tell you when May 21 came and went it was a very difficult time for me – a very difficult time. I was truly wondering what is going on. In my mind I went back through all of the promises God had made. What in the world was happening? I really was praying and praying: “Lord, what happened” because all through this I’d been astounded how God opened door after door.

‘It was marvellous how everything was going until May 21 came. I stayed away from home for one night because the pressure from that phone ringing and people knocking on my door for an interview was more than I could stand. So my wife and I went to a motel and spent the night there.’ He continued: ‘We were convinced that on May 21 God would return here in a very physical way by bringing a great earthquake and ushering in the final five months of the day of judgement and the fact is when we look at it spiritually, we find he did come. ‘We’ve already been talking about the end of the world being October 21 2011 but we have not emphasised that because the beginning of it was the fact that we’d see all these things happening (over the five months).’ He explained by saying he’d received a letter from a ‘listener’ who offered a very interesting theory he wanted to read. If the recent prediction of judgment day put you in a reflective mood, you may want to consider the following ideas and how they apply to your own behavior:

Nobody knows when the rapture will occur; all we can do is try to live our lives in a way that is pleasing to God. There have been many false prophesies about the exact date and time of the rapture; more than likely, there will be many more. Living our lives in a way that is pleasing to God, and making sure that we ask for forgiveness for our sins is one way that we can be ready to stand before God and receive judgment for our actions. Human nature being what it is, we can and will, undoubtedly, make mistakes. God gave us the ability to make our own choices. Because we are human, we are going to make mistakes — sometimes the same one, over and over again. And, occasionally, what we thought was the right thing to do turns out to be the wrong choice. When this happens, we need to make amends and learn from our mistakes. That is how we grow. If there is one certainty in life, it is that on judgment day, each one of us will stand before God and be judged for the choices we, as individuals, made.For more info

Asian Carp Devouring Other Fishes, America Plans To Kill It