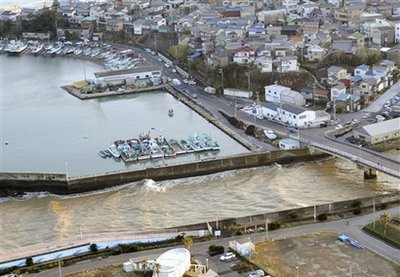 The warning was ominous, its predictions dire: Oceanographers issued a bulletin telling Hawaii and other Pacific islands that a killer wave was heading their way with terrifying force and that “urgent action should be taken to protect lives and property.” In Picture:Seawater moves upward (from left to right) in the mouth of the Kamo River that flows into the Pacific Ocean at Kamogawa in Chiba prefecture, near Tokyo, on Sunday Feb. 28, 2010. The tsunami from Chile’s deadly earthquake hit Japan’s main islands and the shores of Russia on Sunday, but the smaller-than-expected waves prompted the lifting of a Pacific-wide alert. Hawaii and other Pacific islands were also spared.

But the devastating tidal surge predicted after Chile’s magnitude 8.8-earthquake for areas far from the epicenter never materialized. And by Sunday, authorities had lifted the warning after waves half the predicted size tickled the shores of Hawaii and tourists once again jammed beaches and restaurants.

Scientists acknowledged they overstated the threat but defended their actions, saying they took the proper steps and learned the lessons of the 2004 Indonesian tsunami that killed thousands of people who didn’t get enough warning.

“It’s a key point to remember that we cannot under-warn. Failure to warn is not an option for us,” said Dai Lin Wang, an oceanographer at the Pacific Tsunami Warning Center in Hawaii. “We cannot have a situation that we thought was no problem and then it’s devastating. That just cannot happen.”

Hundreds of thousands of people fled shorelines for higher ground Saturday in a panic that circled the Pacific Rim after scientists warned 53 nations and territories that a tsunami had been generated by the massive Chilean quake. It was the largest-scale evacuation in Hawaii in years, if not decades. Emergency sirens blared throughout the day, the Navy moved ships out of Pearl Harbor, and residents hoarded gasoline, food and water in anticipation of a major disaster. Some supermarkets even placed limits on items like Spam because of the panic buying.

At least five people were killed by the tsunami on Robinson Crusoe Island off Chile’s coast and huge waves devastated the port city of Talcahuano, near hard-hit Concepcion on Chile’s mainland.

But the threat of monster waves that left Hawaii’s sun-drenched beaches empty for hours never appeared — a stark contrast to the tidal surge that killed 230,000 people around the Indian Ocean in 2004 and flattened entire communities.

This time, waves of more than 5 feet were reported in Kahului Bay in Maui and in Hilo, on the eastern coast of Hawaii’s Big Island, but did little damage. Predictions of wave height in some areas were off by as much as 50 percent.

In Tonga, where up to 50,000 people fled inland hours ahead of the tsunami, the National Disaster Office had reports of a wave up to 6.5 feet hitting a small northern island, with no indications of damage.

And in Japan, where authorities ordered 400,000 people out of coastal communities, the biggest wave was a 4-foot surge that hit the northern island of Hokkaido, flooding some piers. Hawaii Department of Emergency Management officials use a bullhorn to alert homeless campers of the tsunami on Maile Beach, Saturday, Feb. 27, 2010 in Waianae, Hawaii. Hawaii is under a tsunami warning after a 8.8 earthquake rattled Chile.

After the Pacific Tsunami Warning Center lifted its warning, some countries kept their own watches in place as a precaution. Early Monday, the Japan Meteorological Agency warned of a possible tsunami about a foot and a half in size along its entire Pacific coast and told people to stay away from the waterfront. That warning was cleared later Monday morning.

Scientists offered no apologies for the warnings and defended their work, all while worrying that the false alarm could lead to complacency among coastal residents — a disastrous possibility in the earthquake-prone Pacific Rim.

A similar quake in Chile in 1960 created a tsunami that killed about 140 people in Japan. The same surge hit Hawaii and devastated downtown Hilo, on the Big Island, killing 61 residents and wiping out more than 500 homes and businesses.

“If you give too many warnings and none of them materialize, then you lose your credibility,” Wang said. “That’s something that we have to deal with and we have to improve.”

Despite some of the panic in Hawaii, public officials called the evacuation “perfect” and said it was a good test case that proved the system worked.

Chaos was at a minimum as people heeded evacuation orders and roads were free of the gridlock that can paralyze a region before a disaster. The smooth response occurred largely because the state had so long to prepare; Hawaii is nearly 7,000 miles from where the quake hit, and it took 15 hours for the tsunami to arrive.

“I hope everyone learned from this for next time, and there will be a next time,” said Gerard Fryer, a geophysicist for the warning center.

The science of predicting tsunamis is difficult, given the vast size of the ocean and the volatile forces at work miles below the surface.

Scientists use an earthquake’s magnitude and location as the basis for their predictions and then refine it constantly with data from more than 30 deep-water sensors stationed across the Pacific as the shock wave sweeps across the ocean floor.

The sensors, located at 15,000 to 20,000 feet beneath the surface, measure the weight of the water and beam it to buoys floating on the surface. Scientists then use the data to calculate the tsunami’s wave height in the open ocean as it progresses toward shallower waters.

Coastal inundation models based on topographic mapping add another layer of analysis, helping scientists make assumptions about how the surge will behave in shallower waters and how it might affect shoreline communities.

“There are all sorts of assumptions that we make in trying to figure out how big the waves are going to be. If we can avoid some of those assumptions, maybe we can do a better job,” said Fryer.

“If this event happened tomorrow, even with this knowledge, we would be forced to do the exact same thing.”

Those models could be more accurate if scientists had more deep-water sensors and could build coastal inundation models for vast parts of the Pacific Rim where the topography hasn’t yet been well-surveyed, Wang said.

Because complete data doesn’t exist for every coastal area, scientists must play it safe in their wave predictions, he said.

“Even for Hawaii, we only have a forecast for less than 10 locations, we don’t have inundation models for every coastal point in Hawaii and it’s the same story for the U.S. mainland,” Wang said. “We’ve got to be a little conservative. One point doesn’t tell you that’s going to be the maximum everywhere else.”

Residents and tourists alike in Hawaii said they weren’t bothered by the evacuation and supported the scientists’ actions — even though the waves never showed up.

Eugene Okamoto, 33, said he came to Honolulu from Hilo to visit some tourist attractions with his father and was disappointed the two had to cancel their plans because of the evacuation orders.

But Okamoto said his family understands the tsunami threat better than most because some of his relatives lived through the tidal surge in 1960. They remember how the water was sucked down the beach moments before the wave hit.

“My uncle was on the top floor when all the water washed away and all the kids ran out to grab the fish and before they could get back, the wave came. He was way up top, he saw all his friends get washed away and none of them were found, ever,” Okamoto said, as he sat with his father in a hotel lobby. “They did the right thing.”

————–
This report is written by Sojib2BD with help of Associated Press

Google Introducing Translate for Animals (beta): Bridging the gap between animals and humans