George Lucas just announced that fans will be able to buy all six Star Wars films in HD on Blu0ray disc in the fall of next year. The box set will include the Special Edition remastered version of the original trilogy. 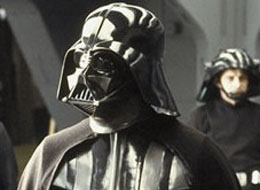 Lucas made the announcement at Star Wars Celebration V, the official convention for the movies and their related properties, and the 2011 launch for the Blu (Blu)-ray discs will mark the 35th anniversary of the release of Episode IV: A New Hope, the first Star Wars film. The discs will include documentaries, interviews, outtakes, deleted scenes and other footage unique to the new set.

The Star Wars films are among a number of killer apps that could encourage movie buffs who’ve been sticking to standard definition DVDs to finally buy Blu-ray players. Advocates of the Blu-ray disc format should be thrilled that this new incentive to adopt the format is finally arriving, but some Star Wars fanatics will be less than pleased that the controversial Special Editions are the only versions of the original trilogy that will be available.

Lucas’ explanation: The original theatrical editions would cost too much to convert to the high definition format. Much of the needed work was already done for the Special Edition remasters. Will you be buying Star Wars on Blu-ray, or will you skip it and watch the 3-minute LEGO version instead?