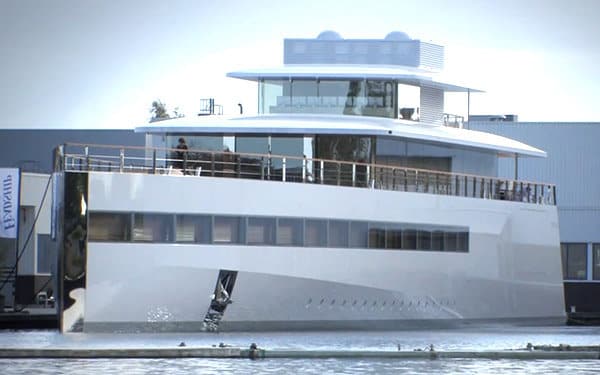 Steve Jobs, former Apple CEO, a man of wisdom, wasn’t only designing products for Apple the months right before his death — he had also labored on a customized 260 foot yacht dubbed Venus. It’s an expensive piece of work, akin to many Apple products on the market. Merely a year after the death of Steve Jobs, shipbuilders in Aalsmeer, Holland have finished the yacht that Jobs envisioned for many years. The masterpiece (pictured above) was a result of  years of design-work, and well, it looks just like an Apple product. The body was built out of aluminium with the help of French designer Phillipe Stack.

It’s a shame that Apple’s late co-founder will be unable to savor his personalized yacht, nevertheless his friends and family will attend the unveiling in The Netherlands.  As a reward token for building the ship, the Jobs family awarded each laborer with an iPod Shuffle with “Venus” engraved on the back.

The extremely high-tech yacht features seven iMac computers on the top-deck and a hull consisting of a 10-foot glass window. Albeit the large size of the yacht, the aluminium design form factor allows for the vehicle to be fairly light weighted.

Walter Isaacson wrote the well-known Steve Jobs biography and noted that his yacht took 6 years of planning ahead of construction. “The planned yacht was sleek and minimalist,” wrote Isaacson in the biography. It was also noted the self-bloated project was one of the few luxuries Steve Jobs had in his life.  Unlike many filthy rich people, Jobs lived in a normal suburb and his house wasn’t a large mansion, despite his large bank account.