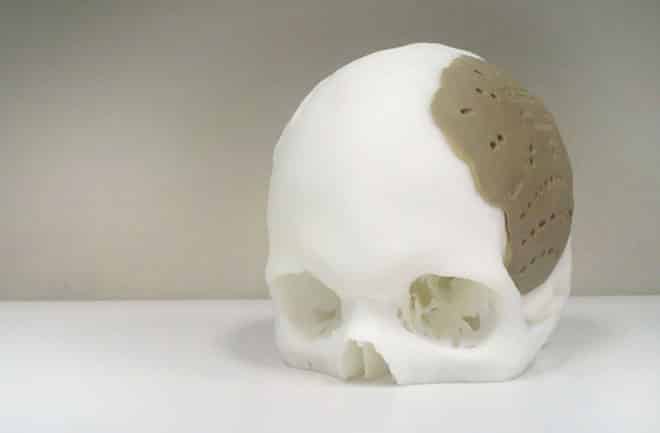 3D printed materials are being increasingly used in fields such as manufacturing, technology and modelling. A 3D printed skull was recently implanted in a woman’s brain, resolving a critical medical condition. We have been hearing about 3D skull implants for some time now. But this is the first case in which one of these implants has actually been placed inside human body and found to be working perfectly. The woman in question had been suffering from a rare condition in which her skull was three times harder than the normal skull.

As the skull grew, it put an extraordinary pressure on her brain. This lead to impaired vision and severe headaches. The solution for this was to operate on her skull and insert an implant. Typically, scientists use hand-made implants for such situations but in this case, a 3D printed skull implant was used.

The operation took a whopping 23 hours to complete and it has been 3 months since it was performed. So far, the implant has proved to be a success, restoring the woman’s sight and helping her get rid of the headaches. And finally, the implant has enabled the woman to lead a normal life despite her condition.

The lead neurologist for the operation was Ben Verweij. According to him, “The patient has her sight back entirely, is symptom-free, is back to work, and it is almost impossible to see that she’s ever had surgery. Implants used to be made by hand in the operating theater using a sort of cement which was far from ideal. Using 3D printing we can make one to the exact size. This not only has great cosmetic advantages, but patients’ brain function often recovers better than using the old method.”

The results of this operation are certainly promising and the precision that is offered by 3D printed implants has an obvious advantage over hand-made implants. This may just be the beginning of a mini revolution in the medical industry, thanks to 3D printing.

Eco-Friendly Hexapod Robot Made By Cardboard