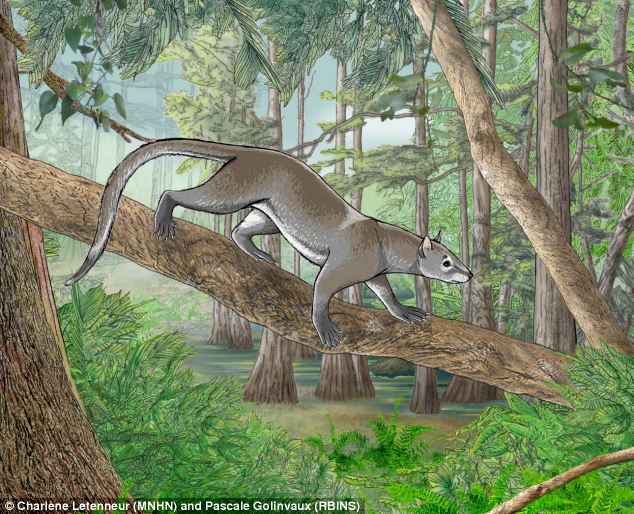 We know that fossils can reveal many things, including the evolution of an species. For instance, earlier we have seen fossils revealing world’s largest feathered dinosaur. However, some scientists in Belgium have unearthed fossils of Dormaalocyon latouri, one of the earliest animals in the animal kingdom, revealing that the fossils are 55-million-year-old and this animal might have fed on smaller mammals and insects.

The Dormaalocyon latouri is one of the earliest carnivores. It was a 1 kg (2 lb) tree-dweller and scientists think that this animal even used to feed other smaller mammals and insects. Scientists found the fossils of this 55-million-year-old animal in Dormaal. Experts believe that this species originated somewhere in Europe.

On the other side, after reconstructing the animal in computer it looked like a cross between a tiny Panther and a Squirrel, with a prominent tail and a cat-like snout. However, after analyzing the fossils, scientists said that these animals came from primitive carnivorous mammals, at the start of the Eocene period, but they are still unsure about their origins.

Professor Floréal Solé from the Royal Belgian Institute of Natural Sciences, who led the study said, “Its description allows better understanding of the origination, variability and ecology of the earliest carnivoraforms. The understanding of the origination of the carnivoraforms is important for reconstructing the adaptation of placental mammals to carnivorous diet. Therefore, Dormaalocyon provides information concerning the evolution of placental mammals after the disappearance of the largest dinosaurs. Our study shows that the carnivoraforms were very diversified at the earliest Eocene, which allows hypothesizing that they were probably already diversified during the latest Paleocene.”

Solé’s words gives us a hint – there are more fossils out there which can be found and which can answer the question of the origin of this beloved modern group.

Source: Nature
Thanks To: Daily Mail

A Happy Marriage Leads To A Healthy Heart

Physics Answers How Basketball Players Can Win The Game