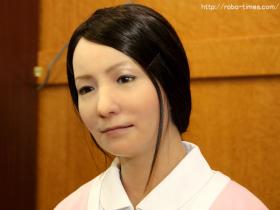 Actroid-F was developed by Kokoro Co. Ltd and ATR. And according to its developers this android is intended to give patients a heightened sense of security. The Actroid-F is a realistic and pretty android that has the ability to replicate its operator’s facial expression as well as its body movements. So if you can’t actually speak with your family over a webcam, this type of creepy robot could replace you. The Actroid-F can speak in your place using webcams and imitate your facial expression and body movements as well.

The Actroid-F has been also recognized by the Guinness World Records as the “first true android” ever made. Apparently, this android is being positioned as an observer in a hospital with the purpose of gauging some patient’s reactions. According to its developer, it took them quite some time before they have been able to make this android act more naturally and independently. The Actroid-F can blink and shift its eyes and neck and even breathe, but its legs cannot actually work so it cannot move from its chair. 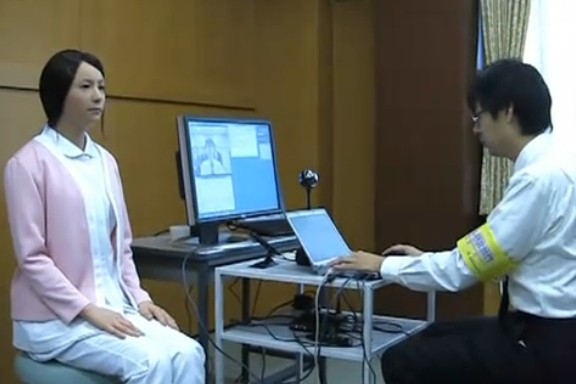 Actroid F is a modified version of the Geminoid F female robot that we discussed earlier. A lot of effort has gone into making these robots simpler, cheaper, and easier to power. The air compressor and valves that control Actroid F’s motion can run off of household electricity. Actroid F is also 30 kg lighter than other full scale robots in the Actroid/Geminoid series. The webcam setup for telepresence is meant to be as simple as possible while still providing the right experience for the user. To talk through Actroid F you need three cameras: one aimed at the speaker to pick up facial expressions and movements, another camera showing the Actroid’s face so the user can see how the robot is conveying her emotions, and a final camera that shows a panoramic view of the robot interacting with people in the room. A little more complex than your standard Skype portal, but that’s to be expected when you are speaking through a robotic avatar. Pay attention in the videos below to see how Actroid F can clearly pick out face and head movements, and adjusts its eyes to follow sound.

The Actroid-F is currently situated at the Uncanny Valley. And it seems that the Actroid-F is such a great invention that might even get better as the years go by. Who knows the development of this type of android might bring very important contributions in various fields in the future.

How To Remove System Defragmenter Virus