Fire Ant is the popular name for ants. They are stinging ants and can be distinguished from other ants by their copper brown head and body with a darker abdomen. During flood, these Fire Ants are supposed to drown. But mysteriously all the time these creates survive. For decades, researchers have been trying to find out how fire ants survive floods. The good news is now researchers have solved the mystery of how Fire Ants survive floods. 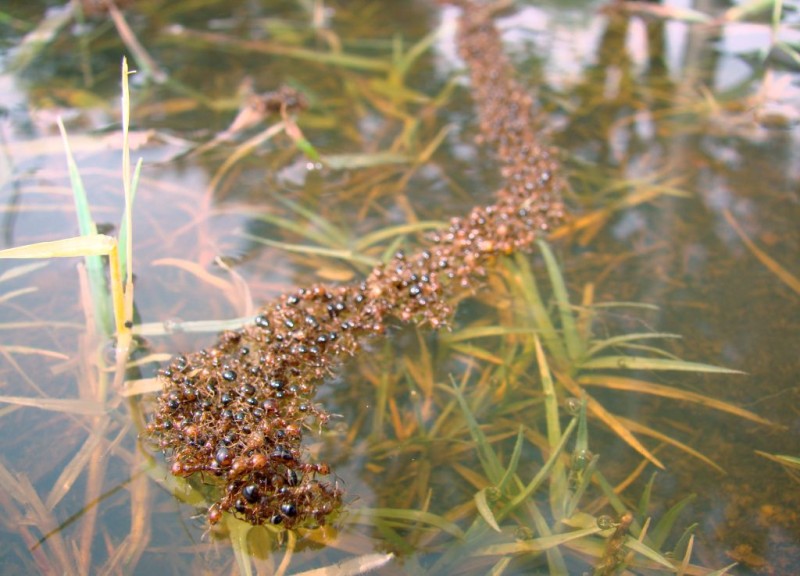 Often ants are found making floating ant colony on water. When flood comes, this so called floating ant colonies are supposed to be shattered and hence the ants should be drowned. But they never die. Such amazing incident grabbed some researchers’ interest and the researchers decided to know how these ants create such safe, long-lasting rafts. So, the group of researchers collected a lot of fire ants by roadsides in Atlanta, froze the Fire Ants and start observing them for few days.

What researchers observed that is during flood when water starts trickling into their house, the ant entire colony – workers, queens, alates, and brood – bind themselves with one another with the help of their different body parts, including their claws and mandibles in order to build a strong raft that enables them to float ‘effortlessly’ for days. The more interesting thing is the raft is also self-healing. It means, if one ant is removed from the raft, others move in to fill the void. In addition, the ants can assemble themselves in about 100 seconds.

Undoubtedly, such floating house is the ultimate vehicle for an emergency flood escape for the Fire Ants. It is to be noted that the floating raft that the Fire Ants make is so strong that it is quiet impossible to shatter. Here’s a video of a floating raft of Fire Ants where a person is trying to shatter or merge the entire raft under water, but failed.

Researchers have published their study on how Fire Ants survive floods has been published in the journal Proceedings of the National Academy of Sciences.