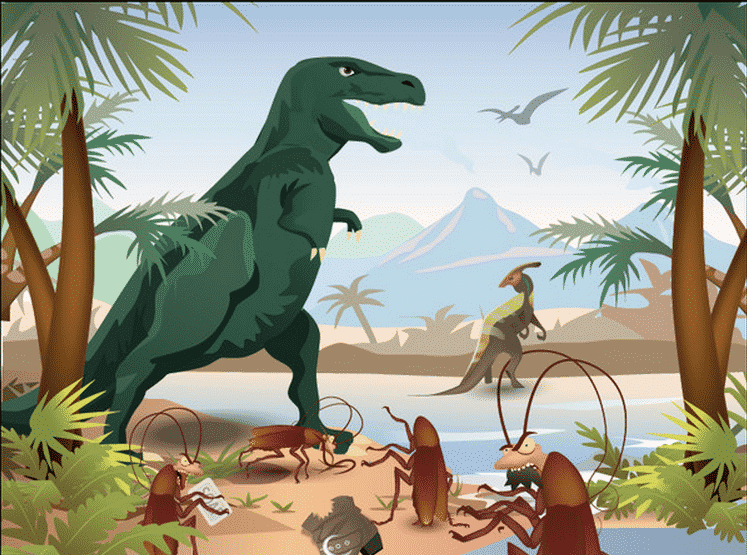 It is believed that once upon a time there were hundreds of thousands of dinosaurs in this world. Naturally they did respond to nature’s call. Interestingly, the researchers from Slovak Academy of Sciences in Slovakia believe that cockroaches ate all the dinosaur faeces! According to researchers from Slovak Academy of Sciences in Slovakia, ancient cockroaches from the extinct Blattulidae family lived alongside herbivore dinosaurs between 250 million and 65 million years ago. The researchers used cutting-edge imaging methods called synchrotron X-ray microtomography to make a 3D model of a fossilized cockroach preserved in a chunk of 120-million-year-old amber in Lebanon. At then, researchers discovered particles of wood inside an ancient cockroach’s gut, which they think came from dinosaur faeces.

At present, neither dinosaurs nor those Blattulidae family cockroaches live in this world. So how did they perish? Well, a study says a giant asteroid destroyed dinosaurs. And the researchers from Slovak Academy of Sciences in Slovakia believe that very Blattulidae cockroaches ate coprolite (dinosaur waste) that contained tiny pieces of smooth edged woods. The cockroache did not chew them and its digestive system could not digest the wood. As a result, during movement the edges of the wood particles split their body and hence, it died.

The researchers study has been published in the journal PLOS ONE.