12,000-Year-Old Girl’s Skeleton May Explain The Origins Of Early Americans

The question of where did the earliest Americans come from, hasn’t been answered to this day. Scientists believe that they may finally have the answer, thanks to a 12,000 years old skeleton of a girl found in Mexico.

The discovery isn’t new and scientists had found the skeleton as far back as 2007. The site of the skeleton was a water body inside a cave called ‘Hoyo Negro.’ A number of divers decided to explore the cave and when they dived into the water inside, they swam 200 feet before coming to the pit.

At the bottom of the pit, not only the remains of the girl were found but also those of sabertooth tigers, sloths, coyotes and numerous other animals. Scientists have named the skeleton of the girl ‘Naia.’ Naia was apparently a teenage girl who fell into the cave some 12,000 years ago and cracked her pelvis as a result. Her body remained at the site until discovered by the divers and confirmed by the scientists.

In March this year, scientists finally decided to have Naia’s skull and four other pieces removed from the cave. This was done because unauthorized divers would come along and tamper with the remains. A closer examination of Naia’s remains is now giving birth to an intriguing question: can she be the missing link in our queries about where the early Americans came from? 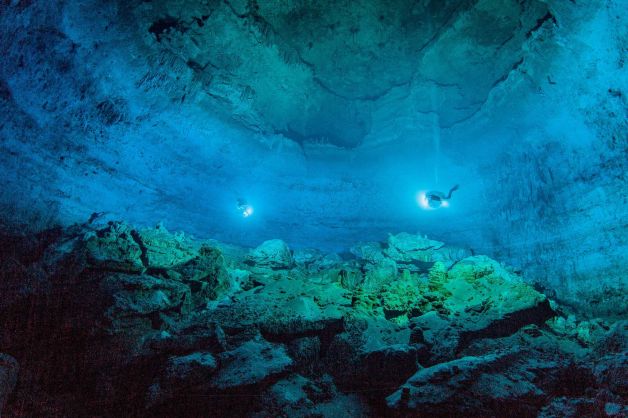 So far, the most prevalent scientific theory says that the earliest Americans came from Beringia, the land bridge between Russian and Alaska. These Americans are termed ‘Paleoamericans.’ But there are missing links in this theory. The Paleoamericans don’t resemble the modern-day Native Americans. They don’t even resemble the Siberians that they have possibly descended from.

The skeleton of Naia is one of the oldest to have been found in the Americas. According to James Chatters, who is leading the research on this, “This expedition produced some of the most compelling evidence to date of a link between Paleoamericans … and modern Native Americans.” The most remarkable thing about Naia is that it can be linked to modern Native Americans through DNA. This is the first time such an old skull could be related to Native Americans.

However, this is still just a theory. Chatters and his team will have to find more details from Naia and gather more evidence to substantiate this theory before the chain becomes clearer.

This Unbelievable Star Trek Mansion Is Available For $35 Million