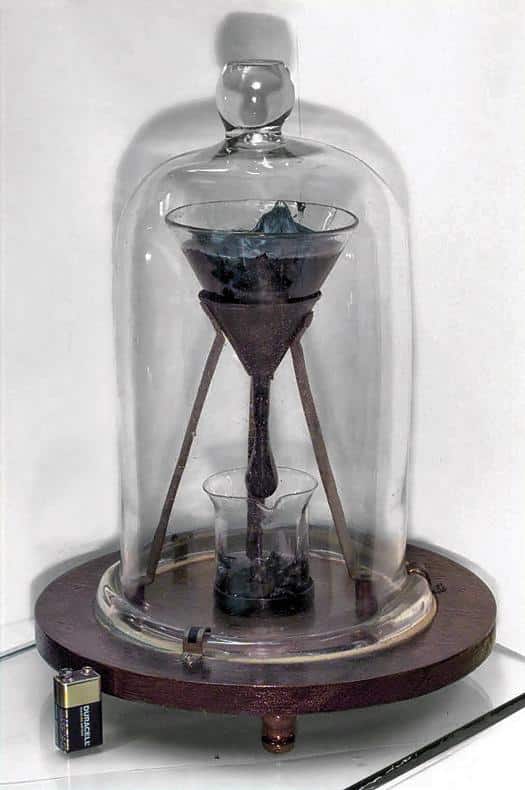 Thomas Parnell, the first professor of physics at UQ, began an experiment in 1927 to illustrate that everyday materials can exhibit quite surprising properties. The experiment demonstrates the fluidity and high viscosity of pitch, a derivative of tar once used for waterproofing boats. At room temperature pitch feels solid – even brittle – and can easily be shattered with a blow from a hammer. It’s quite amazing then, to see that pitch at room temperature is actually fluid! In 1927 Professor Parnell heated a sample of pitch and poured it into a glass funnel with a sealed stem. After 3 years (it took 3 years to settle the pitch), meaning in 1930, the sealed stem was cut and since then the pitch had been dripping very slowly out of the funnel.

And finally, after 84 years later, the ninth drop has been fully formed. But it is very sad that the very man (Thomas Parnell) who had started experimenting the pitch drop, died in his sleep while he was 78 years old.

It is to be noted here that, in the past 84 years, no-one has ever seen the drop fall. On the other hand, if you’re interested to have a look at the experiment, then the following video is for you, capturing the descent of the imminent 9th drop between the period of 28th April 2012 to 10th April 2013.

Source: The University of Queensland

Algorithm Reads Novels And Creates Music About Them

NASA Cuts Budget From Other Projects To Focus On Mars