Sub-Atomic Particles Travel Faster Than Light, Einstein’s Theory Of Relativity To Be Challenged

A major breakthrough has occurred in the history of physics recently. The scientific experiment wants to jeopardize the much accepted theory of relativity by Einstein in 1905. Some international physicists unveiled the result of their research over the last three years this last Thursday. The result shows that sub-atomic particles neutrinos travel slightly faster than the speed of light which is enough to claim the drawback of Einstein’s relativity theory according to the scientists. It’s a bit shocking result to the scientists also. 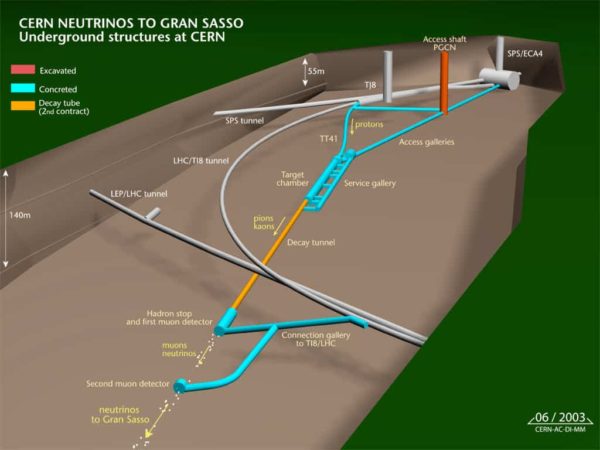 It was an underground experiment unveiled after three years after much accepted evidence with data though other scientists are still cautious about the result of this experiment as it directly opposed the long-accepted theory of relativity by Einstein based of which the modern physics is created.

The experiment is called OPERA which stands for Oscillation Project with Emulsion-tRacking Apparatus. OPERA ran in the Gran Sasso National Laboratory in Italy that lies 1,400 meters beneath the ground. The neutrinos were thrown from CERN, on the Swiss-French border near Geneva, 730 kilometers (454 miles) away to the INFN (Istituto Nazionale di Fisica Nucleare) Gran Sasso Laboratory in central Italy.

Neutrinos are fundamental sub-atomic particles which are electrically neutral. They have too little mass to interact with other particles. The existence of the neutrino was first confirmed in 1934. Neutrinos are actually all around us. They can pass through anything without being detected over the long distance. Sun also produce such neutrinos as a by-product of the nuclear reaction. Scientists say that millions pass through our body every day, we don’t even know. At the first time, they were thought to have no mass at all. Not before 1990s, research showed they had actually very light mass. 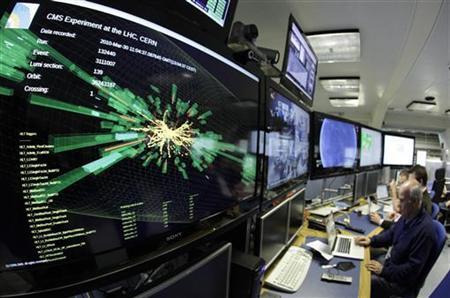 The neutrino interactions are rare to happen. That’s why, it makes them hard to be selected for any scientific measurements. However, the researchers fired 16,111 beams of neutrinos that pervade the cosmos over the past three years from CERN toward Gran Sasso. At Gran Sasso, there was 1,800-tonne OPERA detector to grab the beams. The detector is a complex array of electronics and photographic emulsion plates.

The experiment directly opposes to the idea of relativity theory. The relativity theory asserts that nothing in the universe can travel faster than the speed of light. It’s one of the most fundamental assumptions of science on which the modern physics is based on. John Ellis, a theoretical physicist at CERN states, “If it’s true, then it’s truly extraordinary.”

Antonio Ereditato, one of the researchers told, “We have high confidence in our results. We have checked and rechecked for anything that could have distorted our measurements but we found nothing. We now want colleagues to check them independently.”

“It is a tiny difference,” said Ereditato, who also works at Berne University in Switzerland, “but conceptually it is incredibly important. The finding is so startling that, for the moment, everybody should be very prudent.”

Actually, the result was also unexpected to the researchers. The scientists were studying another event that transforms the muon variety of neutrinos into the tau variety. Unexpectedly, they found the neutrinos speed to overtake the speed of light. “This result comes as a complete surprise,” said Antonio Ereditato in a statement.

The physicists claimed to have measured the 730-kilometer trip between CERN and its detector to within 20 centimeters. They can measure the time of the trip to within 10 nanoseconds. The measured the trip of neutrinos with advanced and precise tracking system. They used very precise GPS measurements and also atomic clocks to synchronize timing between CERN and its detector in Gran Sasso Laboratory.

A similar result was found in an experiment back in 2007 in Minnesota. The experiment was called MINOS which stands for “Main Injector Neutrino Oscillation Search”. In that experiment, the neutrinos were fired from particle-physics facility Fermilab in Illinois. They arrived slightly ahead of light speed. But the MINOS team was uncertain about the actual position of the detector which led the experiment to be failure. But Jenny Thomas, a spokeswoman for the experiment, says that MINOS was already planning more accurate follow-up experiments before the latest OPERA result, according to SA. “I’m hoping that we could get that going and make a measurement in a year or two,” she says.

Ellis is not convinced by the result of OPERA. He says, “Many experiments have looked for particles traveling faster than light speed in the past and have come up empty-handed. Most troubling for OPERA is a separate analysis of a pulse of neutrinos from a nearby supernova known as 1987a. If the speeds seen by OPERA were achievable by all neutrinos, then the pulse from the supernova would have shown up years earlier than the exploding star’s flash of light; instead, they arrived within hours of each other. It’s difficult to reconcile with what OPERA is seeing.”

Ereditato says that he welcomes skepticism from outsiders, but adds that the researchers have been unable to find any other explanation for their remarkable result. “Whenever you are in these conditions, then you have to go to the community,” he says.

Watch the below video by Reuters

Scientists Find A Way To Turn Light Into Matter

Medical Researchers Must Use More Female Animals In Lab For Experiments