MIT Researchers Developed A Technology To Convert Metal Into Semiconductor

A topological insulator is a material with time reversal symmetry and trivial topological order, that behaves as an insulator in its interior but whose surface contains conducting states, meaning that electrons can only move along the surface of the material. Lately, some MIT researchers have succeeded in producing and measuring a coupling of photons and electrons on the surface of topological insulator. As a result, now they’ve developed a technology for converting metal into semiconductor.

Ordinary band insulators can support conductive surface states. But the surface states of topological insulators are special since they are symmetry protected by particle number conservation and time reversal symmetry. In the bulk of a non-interacting topological insulator, the electronic band structure resembles an ordinary band insulator. On the surface of a topological insulator there are special states that fall within the bulk energy gap and allow surface metallic conduction. Carriers in these surface states have their spin locked at a right-angle to their momentum (spin-momentum locking). At a given energy the only other available electronic states have different spin. The “protected” conducting states in the surface are required by time-reversal symmetry and the band structure of the material. The states cannot be removed by surface passivation if it does not break the time-reversal symmetry.

However, developing a technology to convert a metal into a semiconductor is not so easy. But using a laser, MIT researchers have made a technology that can do this. 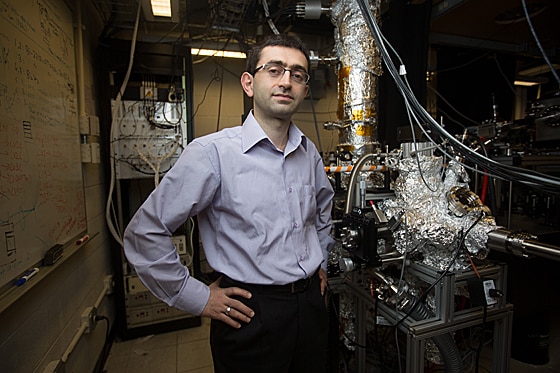 The MIT researchers’ method involves shooting femtosecond (millionths of a billionth of a second) pulses of mid-infrared light at a sample of material and observing the results with an electron spectrometer, a specialized high-speed camera the team developed.

According to researchers, this finding could lead to the creation of materials whose electronic properties could be “tuned” in real time simply by shining precise laser beams at them. This work opens up a new avenue for optical manipulation of quantum states of matter.

Researchers have suggested that it’s possible to alter the electronic properties of a material just by changing the laser beam’s polarization.

Source: MIT
Thanks To: RtoZ.org

Digital Tattoos And Mind-reading Headphones May Come In Near Future