Flyby of Hyperion by the Cassini spacecraft from November 2010. Movie composed of 61 frames taken with the narrow angle camera (NAC) through a variety of different filters.Here’s color video of Hyperion, a very strange moon located 800 million miles from Earth. 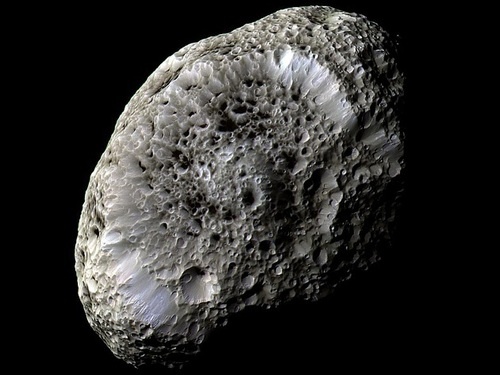 As Bad Astronomy explains it, the jump cuts and discrepancies in the animation are probably due to course corrections the probe made as both it and the moon passed by one another. Nothing’s perfect. Another fine photography session from Cassini.

Here’s the video which shows Hyperion floating through the blackness of space. It’s pretty cool and powerful, particularly when you remember this isn’t a special effect but an actual event that very recently occurred:

Hyperion itself is one of the stranger moons in the solar system. It was the first irregular moon ever discovered, and it looks more than a little like a giant space potato. It’s the second-largest non-spherical object in the solar system, and its precise origins remain a mystery. It rotates chaotically, meaning its axis of rotation wobbles around so much that there’s no way to predict its orientation in space ahead of time. It also looks a lot like sponge thanks to its deep, sharp craters, which again nobody can quite explain.

Fabien Cousteau To Live Underwater For A Month For Expedition

Researchers Get First Images Of Molecular Changes During Chemical Reaction

Mother Fights For Miracle Son With Half A Brain

Your Cellphone Usage May Reveal Your Brain Dominance