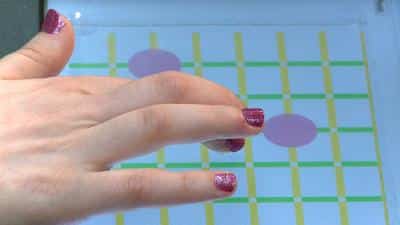 With the bulk of masses moving from a PC-centric world to increasingly ‘migrate’ to tablets, the nifty touchscreen devices have opened up a whole plethora of possibilities. Researchers at Vanderbilt University have devised which app which can be an excellent aid for visually impaired students. With the help of this app, such students are able to trace the shape of geometrical shapes on the touchscreen without requiring to actually be able to look at it. This awesome app has been developed by Jenna Gorlewicz who is a graduate student in the Medical and Electromechanical Design Laboratory (MED Lab). She was able to accomplish the creation of this app with the help of Robert Webster who is an assistant professor of mechanical engineering.

The significance of this app is not mostly in what it can currently perform, although even that is no small feat. Currently, the app lets a student trace lines, shapes on the touchscreen and through vibrations and sounds, it directs him/her to trace the whole shape correctly. This can be instrumental in teaching visually impaired students about different shapes, specifically the irregular ones, for instance different kinds of graphs. In fact, the app can be further advanced (and herein lies the real potential of the app) to create an all-new graphical calculator for visually impaired students!!

Jenna, the student who’s dream to really create something useful steered her to take up this project, says that she wanted a project that could directly help people. Fortunately, her fellowship afforded her the opportunity to realize her dream and come up with the app.

Whereas the app still accomplishes some quite basic functions, we can hope that in the coming days, it can open doors to lot of more possibilities. Here is the video which gives you an insight into the project: