Apple has posted job listings on LinkedIn for field test engineers with experience testing LTE equipment, which indicates that Apple is indeed looking to ship an LTE iPhone in the near future and field testing phones is a common part of the process in ensuring that the devices work in real-world scenarios outside of a lab. If the company is testing such devices out in the field it could mean it is on iOS 5 devices and it is not only the next iPhone but the iPod Touch and maybe even the iPad 3………….. 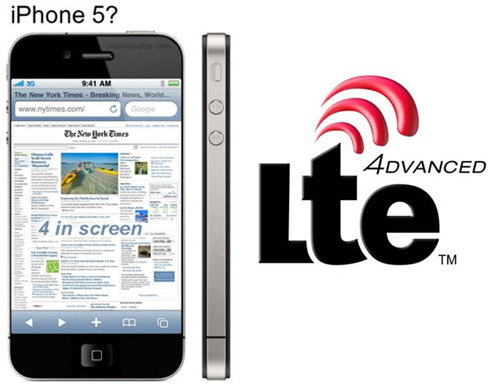 A recent report claimed that Apple’s carrier partners were already exploring LTE iPhones and this rumor became juicier with the discovery of LTE antennas being installed in some Apple Store locations in the United States. Now 9tomac.com, have discovered that carriers are not only testing an LTE iOS device in some fashion, but Apple actually has references to LTE in their iOS 5 field-test application. This could mean that Apple has actual LTE devices in a field-test stage. The news comes straight from Apple’s field-test application that is installed on fully functioning iOS devices. The big picture here is that carriers are not just testing Apple LTE devices in their previously revealed chambers, but Apple actually has multiple references to the technology in their iOS 5 field-testing mechanism. In fact, the LTE references are even present in certain developer build plist files, not just the field-test application, as discovered by MacRumors. Apple’s LTE devices will be covering the current carrier-band spectrum, running on bands from 1.4 to 20 MHz. This Apple field-test application references LTE SIM-cards as well. This not only means that Apple’s current LTE test devices are built-up enough to support a SIM-card, not just a bunch of wiring on a board, but that hopes of an integrated SIM-card system are likely still not going to come to fruition.The field-test application will also collect usage logs for Apple, furthering evidence that this is not simply an in-lab or in-box testing by carriers, but full-on testing against LTE tower connections in the wild.

If Apple is actually testing LTE devices in the field, it may seem the most interesting part is that the testing could be happening right now, on iOS 5 devices. The next iPhone will be an iOS 5 device and so will the next iPod touch, but the most interesting iOS 5 device is the iPad 3. This is Apple’s largest iOS device and the device that they could technically cram the most components and battery life into. Apple is gearing up to launch an iOS 5-packing third-generation iPad in early 2012. A 9.7 inch tablet would be perfect for an LTE chip because of the hardware’s naturally larger (compared to an iPhone) internal component space. As LTE networks grow from both Verizon and AT&T in the United States into the first half of 2012, the iPad 3 will be the perfect LTE launch device from Apple. Unlike the iPhone, users will not need to rely on having a constant cellular connection – in addition, most of the iPads sold are the WiFi-only models.  According to a source within Apple’s retail operations, Apple and Verizon installed Verizon 3G antennas in select Apple Stores around six months prior to the launch of the Verizon iPhone 4. We are amidst the process of Apple, AT&T, and Verizon installing LTE antennas in Apple Stores. While the connection here is quite obvious and a nice coincidence, we have no way of knowing if it is more than a just coincidence; we sure hope it is, though. Now, we at least know that Apple is testing LTE devices in the wild with their upcoming software release.