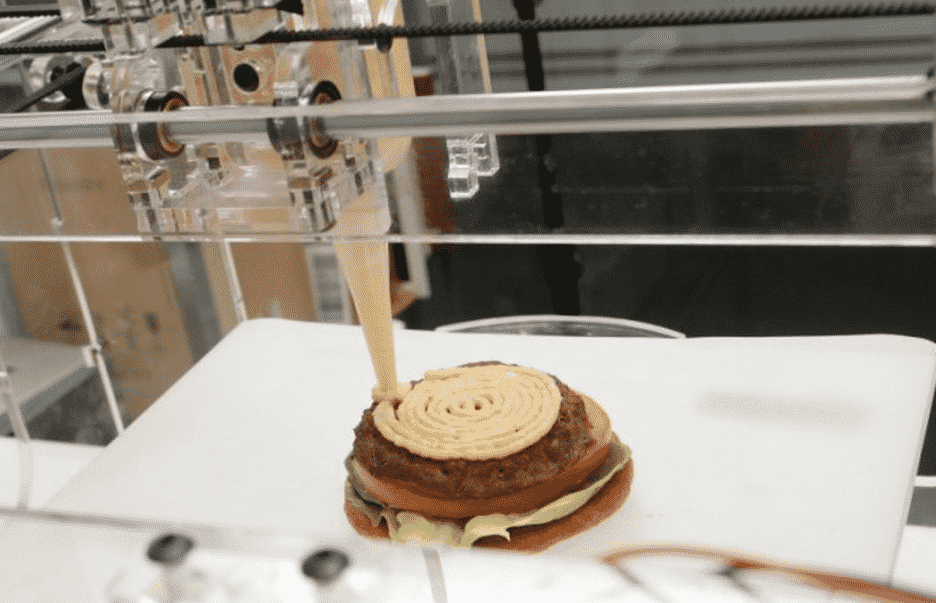 Over the past few years, 3D printers have become increasingly popular. In fact, 3D printing is now playing a significant role in many fields. However, earlier we have seen NASA funding a project to build 3D food printer, but in the mean time, Barcelona-based company Natural Machines has already created a 3D printer named Foodini that can make dessert, ravioli, burgers and more.

A 3D printer is a materiel printer that can construct 3D objects from 3D modeling data. Unlike other machines that uses subtractive process, this type of machines put successive layers to construct. Using 3D printing, many things can be created like Rubik’s Cube, jaw, shoes, flute, edibles from common materials and so on. And now, Natural Machines has brought 3D printer Foodini. Unlike everyday printers, the 3D versions create objects by laying down layer after layer of plastic, metal or whatever material is required. The Foodini works on exactly the same principle.

The Foodini can hold five capsules, each potentially containing a different ingredient. The shapes it forms — and the quantities emitted — are controlled by a computer. As and when each ingredient is required, the computer automatically switches from one capsule to another and then pumps their contents through the ‘extruder’, or nozzle. The specialty of Foodini is it can exactly replicate hand made prepared food like ravioli, burgers, nuggets and more within a very short time. The machine can print out a perfect circle of dough. It works so perfectly that you won’t find ingredients like flour, sauce or something else scattering around the food. Its sleek design will hide all the working parts, but users will be able to look in and watch as the ingredients are automatically pumped through the ‘extruder’, or nozzle.

Lynette Kucsma, co-founder of Natural Machines said, “Foodini takes on the difficult parts of making food that is hard and/or time consuming to make fully by hand. One of our goals is to streamline some of cooking’s more repetitive activities – forming dough into breadsticks, or filling and forming individual ravioli – to encourage more people to eat healthy, homemade foods. Choose your recipe from our online recipe site, or create your own. Then let Foodini do the hard part. You prepare and load the fresh ingredients, and Foodini will create the dish. Depending on the recipe, the food is either ready to eat after Foodini is done, such as a chocolate dessert, or you’ll need to finish cooking the dish prior to eating, like ravioli.”

Kucsma also said that, “I have two children aged five and three who aren’t keen on their greens. So I took the machine home and printed them a spinach quiche. I did it in the shape of a dinosaur for my son and a butterfly for my daughter. They loved it and ate it all up. It had the same ingredients as a quiche that they normally wouldn’t touch, but the different shape was a game changer. This is much more than just a gimmick. The last revolution in the kitchen came with the microwave — we believe that the Foodini could be about to transform the preparation of food to the same extent.”

Kucsma has hinted that Foodini will be available for general people in mid-2014. It will have roughly a size of a microwave. Foodini 3D printer will cost around £835 or $1,300. Here’s a video of Foodini 3D printer.

Android has crossed over 55 Million Units in 2010

Water-Proof, Magnet-Proof And High-Speed SD And MicroSD Cards From Samsung