Apple has released an update to AirPort Utility, which is the tool used to configure AirPort Extreme base stations, AirPort Express units and Time Capsule devices, update addresses a problem where the previous version would quit unexpectedly during setup and the update is a 10.8MB download that can be installed using Apple’s Software Update utility r via manual download from Apple’s support Web site for both Mac OS and Windows clients……… 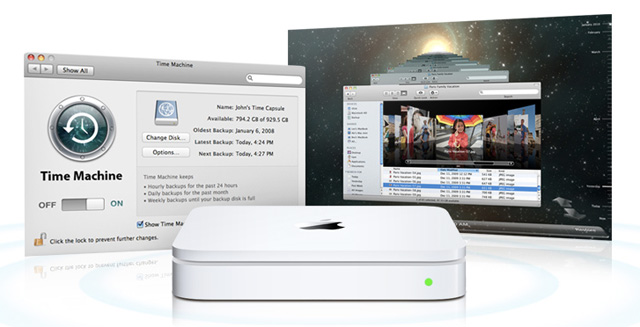 Apple released its AirPort Utility 5.5.3 update on Monday and this documentation for the 10MB downloads lists only that it resolves an issue that caused the AirPort Utitlity to unexpectedly quit during setup. The particular interest are listings for K31 K30B Time Capsule (Simultaneous Dual-Band, Gen3) and K10B Apple AirPort Extreme (Simultaneous Dual-Band, Gen3). Elsewhere in the code for the utility, the rumored devices are reportedly listed as Time Capsule 802.11n (4th Generation) and AirPort Extreme 802.11n (5th Generation). Apple‘s current simultaneous dual-band AirPort products, which were last updated in October 2009, are described as Gen2. Recent reports have suggested that available stock of Apple‘s AirPort and Time Capsule wireless base stations has dwindled ahead of a product update. The latest rumors claim Apple may shift the base stations to run iOS. iOS-based AirPort base stations could allow for more robust features, such as print and media streaming services, integration with iCloud and cached wireless software updates. Code references in AirPort Utility seem to support the likelihood of software update caching, according to people familiar with the matter. Also, indications that Apple is working on wireless drivers for non-Intel CPUs may point to the possibility that Apple plans to enable iOS devices to setup and configure new AirPort or Time Capsule devices without the help of a Mac or Windows PC.

Google Sync Gets Update For iPhone And iPad