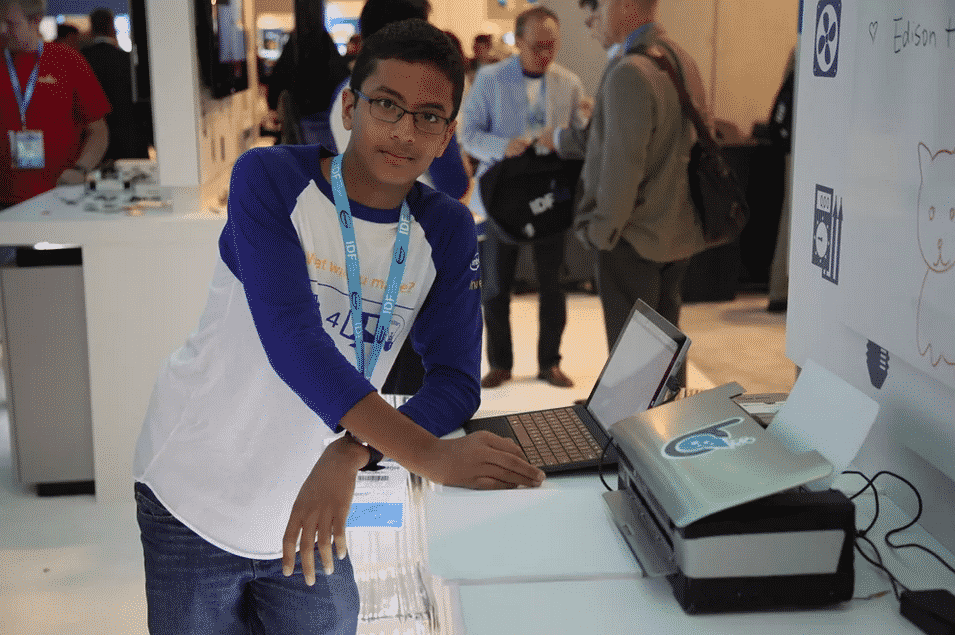 13-year-old boy Shubham Banerjee is the inventor of Braigo. Braigo is a play on the words Brai-lle + Le-go, which is a portable braille printer, made using a Lego Mindstorms EV3 kit which includes a microprocessor with assorted components such as electric motors, sensors and actuators. Lately, this 13-year-old entrepreneur has got fund from Intel to make low-cost Braille printer. Banerjee designed Braigo v1.0 in January 2014, as an entry in a 7th grade school science fair project. The cost was said to be about 350 USD or 250 Euros for the Lego Mindstorms EV3 kit. Over the summer of 2014, Banerjee reported about working on Braigo v2.0 which promises to be a consumer version of a braille printer/embosser.

However, on September 9, 2014, at the Intel Developers Forum (IDF 2014), at the Mega Session: The Next Revolution in Computing: Edison, Wearables, and New Devices with Intel VP & GM, Mike Bell, Banerjee demonstrated Braigo v2.0 which promises to be the world’s first – most cheapest, silent, IOT enabled and light weight braille printer or embosser using new patent pending technology along with the Intel’s Edison Chip with associated development board to bring a consumer oriented braille printer/embosser to the market. Banerjee showed his developing work of this low-cost Braille printer at an event hosted by Intel in September. At then, he said, “It is less power-hungry and has the future possibilities of using batteries… in remote places of the world. The capability of Edison enabled me to do a whole set of use cases I hadn’t previously thought about. For example, when we wake up in the morning we look at our Smartphone or tablet to look the headline news. With Edison, we’ve set it up so the CNN headlines are printed off automatically every morning.”

To invent this low-cost Braille printer to market, Banerjee has received funding from Intel. The actual sum is not known, but it’s been heard that the amount is “few hundred thousand dollars”. Clive Gardiner, Head, RNIB reading and digital services said, “We welcome investment in technology that aims to improve everyday life for blind and partially sighted people and especially applaud this brilliant initiative from such a young entrepreneur. Electronic braille has great potential, but has been hindered to date by high device cost for users. New innovations for low-cot Braille printers such as this one… can transform reading choices for people with sight loss who read Braille. We look forward to hearing more about its progress.”

This teenager hopes that he’ll be able to make such a commercial model that will be cheap. But being one of the youngest tech entrepreneur to find success, he’s not at all interested to dedicate his life to the project at this stage as “it’s an after-school thing” to him.