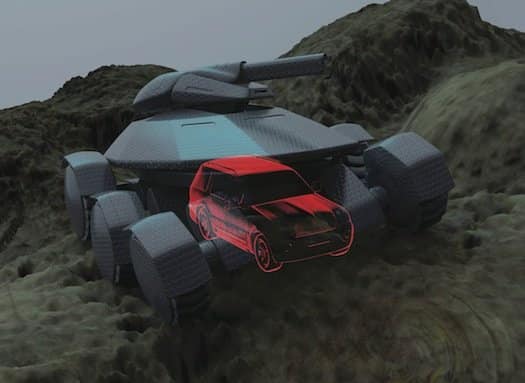 Battle Field vehicle ‘Tanks’ those are heavy and generate a lot of heat, can be easily seen at day time and at night it can be detected also by infrared imaging equipments. The British company BAE Systems successfully invented and unveiled its new Adaptiv System, that can absorb (hide) a tank’s heat beneath hundreds of Electro-thermal cells bolted of the vehicle’s external side. Looks like, real life James Bond movies are trying to be made! As we know, Infrared sensors are able to detect the pattern of heat/temperature reflected by a tank. There is a processor that guides the pixels in a computer screen to view/create an image. Then, it adjusts the temperature and transform it from individual cells to a collective one where the heat signatures match with the environment. But, in infrared, the background vanishes the tank. The Adaptiv system is based on hundreds of 5.5-inch hexagonal cells. These cells are heated/cooled with electric current to make a customized heat signature. Here, the main thing depends on its Motion. As, the system is dynamic, it will be able to synchronize the vehicle’s heat signature to its surroundings. It means, the temperature of the tank will remain same no matter whether it is statistic or moving. On the other side, as the engine of the tank consists of the techniques from Stealth Aircraft construction, therefore, tanks manufacturers are thinking to incorporate broad and flat vents that can produce ribbons of exhaust. This process will mix the heat of the tank more fast with cool air. Moreover, as the vents would be low to the ground, the exhaust would be disguised for the heat signature of the surrounding vegetation.

It’s really tough to make a silent engine tank that can camouflage for stealth combat missions, but BAE has already started testing its next generation of cells that is more advanced beyond imagination. The tanks will come with an undisclosed coating those can not only change its color but also its brightness. Moreover, it should have the power/ability to avoid/escape rudimentary IEDs (Improvised Explosive Device). BAE says the system will be ready for battle/war in two years.

Rumor: Pre-sale of the Apple iPad in next week?

Developer Revenue in iAd Increased To 70% By Apple