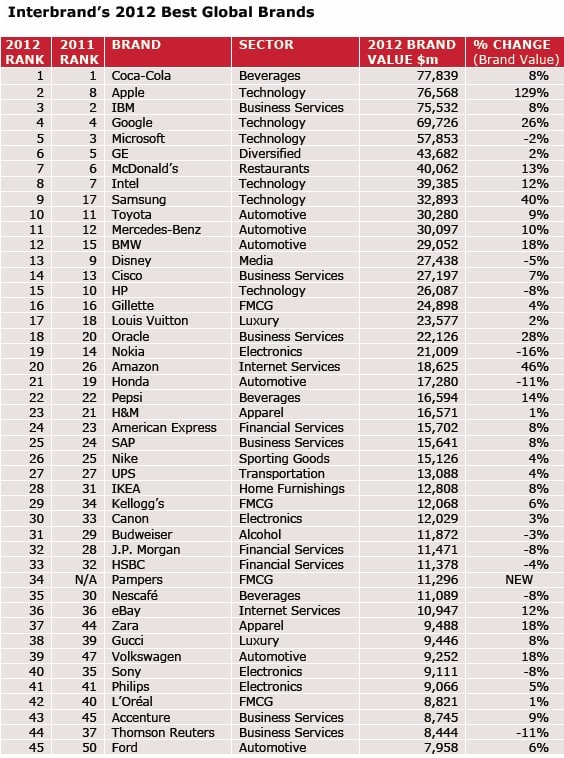 There are a number of global brands which are wildly popular among the masses, not only in the developed countries but also in the developing nations. These brands range from technology to food to beverages and auto-mobiles and a whole range of other products. Interbrand has released its 13th annual Best Global Brands report revealing this years biggest brands. Coca-Cola has secured the top spot in the list, followed closely by Apple.

To gauge the ‘value’ of a given global brand, Interbrand considered three chief factors upon which it measured the brand’s performance. The primary factor, naturally, was to determine the financial success of a brand since success was directly proportional to the sales growth of that brand. Second, Interbrand determined the influence a brand can exert on a consumer’s choices. Finally, the third factor which Interbrand used was to see how much power can the brand exert in pushing out premium services successfully.

As it turns out, based on these three indicators, Coca-Cola is the most valuable global brand. Apple comes closely at the heels of the beverages company, having seen tremendous growth in its overall brand value in the last one year. The company jumped up by 129% in its brand value, securing a second place on the list. Samsung, in contrast, witnessed a 40% growth in its brand value and currently sits on the 9th position.

Last year, Microsoft was on the 3rd position in the list. But this year, along with Coca-Cola, Apple and IBM occupied the first three positions. Google went up the ladder and occupied the fourth position, pushing Microsoft down to the fifth position. This is the first time Google has overtaken Microsoft in brand value which shows the immense growth that the company is undergoing.

The list of top 45 most valuable global brands has been listed below.