In Moscow, drivers reported an average delay of two-and-a-half hours when asked to report the length of the worst traffic jam they experienced in the past three years and the recent IBM Commuter Pain Study paints a grim picture of metropolitan-area commuters in many cities struggling to get to and from work each day, often with negative consequences.IBM, Caltrans and UC Berkeley aim to help commuters avoid congested roadways before their trip begins, shows off Smarter Traveler traffic prediction tool,first-of-a-kind collaboration to analyze real-time traffic patterns and individual commuter travel history to forecast faster and safer routes…………. 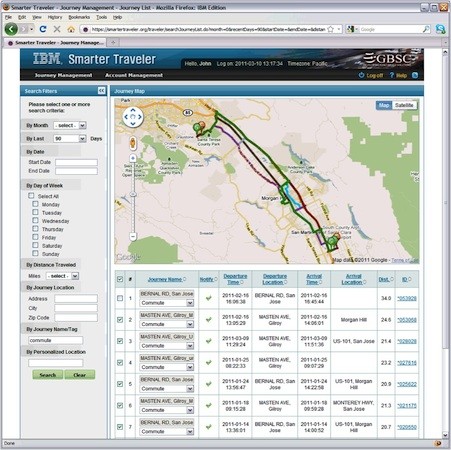 IBM announced a new collaboration with the California Department of Transportation (Caltrans) and California Center for Innovative Transportation (CCIT), a research institute at the University of California, Berkeley, to help commuters avoid congestion before their trip begins and enable transportation agencies to better understand, predict and manage traffic flow. In a technology advance that will ultimately help drivers around the world avoid rush hour traffic jams, IBM Research has developed a new predictive modeling tool that will let drivers quickly access personalized travel recommendations to help them avoid congestion, and save time and fuel. By joining forces, IBM, Caltrans and the Mobile Millennium team within the CCIT hope to provide drivers with valuable predictive information on what traffic patterns are likely to look like even before they leave work or home and get in their vehicles rather than discover what has already happened and is being reported.Using this predictive and analytic traffic tool, transportation agencies and city planners in the future will be able to proactively design, manage and optimize transportation systems to deal with ever-increasing traffic due to population growth and increasing urbanization.

“As the number of cars and drivers in the Bay Area continue to grow, so too has road traffic. However, it’s unrealistic to think we can solve this congestion problem simply by adding more lanes to roadways, so we need to proactively address these problems before they pile up,” said Greg Larson, Chief of the Office of Traffic Operations Research, Caltrans. “Together with partners like CCIT and IBM we’re driving a new age of science-based, data-centric traffic management that will give commuters the benefit of knowing the fastest, most cost-effective and eco-friendly route to their destination.”Traffic delays caused by highway incidents such as work zones, crashes or simply by morning and evening rush hours routinely stymie frustrated drivers. Even with advances in GPS navigation, real-time traffic alerts and mapping, daily commute times are often unreliable, and relevant updates on how to avoid congestion often reach commuters when they are already stuck in traffic and it is too late to change course. This inability to avoid traffic congestion has led to commuters across the United States wasting on average almost a week’s worth of time, 28 gallons of gas and $808 over the course of a year Source: http://mobility.tamu.edu/ums/report/congestion_cost.pdf .

In Silicon Valley, the problem is especially acute. In comparison with cities of a similar size in population, drivers in the city of San Jose waste a cumulative of 10 million more annual hours sitting in traffic jams and suffer a 15% higher commute delay per peak-time traveler.Spanning the San Francisco Bay Area Region, the new Smarter Traveler research initiative collects and analyzes traffic data generated from existing sensors in roads, toll booths, bridges and intersections. This unique project combines that data with locations based on GPS sensors in participant’s cell phones to learn their preferred travel days and routes. Alerts are then automatically delivered via email or text message on the status of the driver’s typical commute before the trip begins, which eliminates potential distraction once a driver is on the road. These alerts will enable drivers to plan and share alternative travel routes, improve traveler safety and help transportation authorities better predict and reduce bumper-to-bumper traffic before it occurs through improved traffic signal timing, ramp metering and route planning.

The researchers will leverage a first-of-its-kind learning and predictive analytics tool called the IBM Traffic Prediction Tool (TPT), developed by IBM Research, which continuously analyzes congestion data, commuter locations and expected travel start times throughout a metropolitan region that can affect commuters on highways, rail-lines and urban roads. Through this Smarter Traveler research initiative, scientists could eventually recommend better ways to get to a destination, including directions to a nearby mass transit station, whether a train is predicted to be on time and whether parking may be available at the station.“Unlike existing traffic alert solutions, we’re helping take the guesswork out of commuting,” said Stefan Nusser, Functional Manager, Almaden Services Research, IBM. “By actively capturing and analyzing the massive amount of data already being collected, we’re blending the automated learning of travel routes with state-of-the-art traffic prediction of those routes to give travelers timely information that can help them make decisions about the best way to get to their destination.”

Take A Tour On Apple ‘Spaceship Campus’ With Drone Video