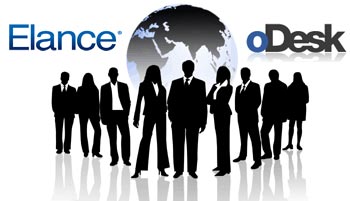 The biggest two player in Freelancing Marketplace is merging together. This news came to me as pure shock (not in bad way). oDesk CEO Gary Swart announced it on oDesk company blog. This merger is almost like Coke-Pepsi merging together! But they claimed they will perform separately as they are doing right now, though oDesk CEO Gary Swart is leaving, and Fabio Rosati, Elance’s CEO will be taking the lead, and oDesk CEO Gary Swart assuming the role of “strategic advisor”.

oDesk and Elance are now waiting regulatory approval, and they plan to complete the merge very quick. Their boards and management teams are merging too, and they’re thinking about moving from their offices in Redwood City (oDesk) and Mountain View (Elance) to one central location in San Francisco possibly.

In the online freelance business, the primary competitor of Elance-oDesk is Freelancer.com, which has nearly 10 million registered users, though the two companies also has competitor like design marketplace 99Designs and mini-task site Fiverr. oDesk has so far raised $46 million in venture capital, while Elance has raised roughly double that amount.

oDesk CEO Gary Swart said – “Together, [our] companies have done $2 billion in a market that’s more than $422 billion. We’re not even scratching the surface of the disruption that’s ripe for the 1.0 way of working.”

According to oDesk CEO Gary Swart they expect this merger will be complete by Q1 of 2014. We seen kind of negative reaction among freelancer worldwide. We wish both companies good luck, but what do you think? Share your thoughts with us.