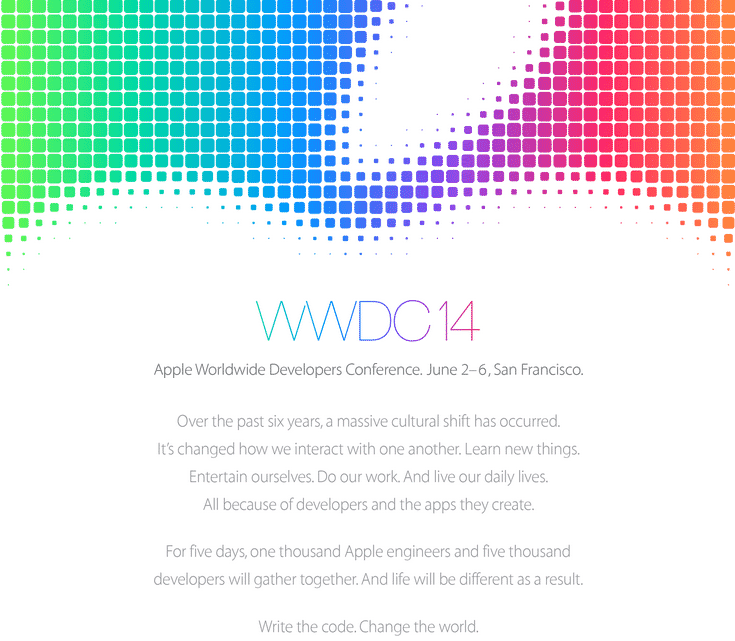 Worldwide Developers Conference (WWDC) is the big annual event of Apple. Last year, WWDC 2013 started on June 10. And lately, Apple has declared that its WWDC 2014 will start on June 2 at San Francisco’s Moscone West. Last year, Apple unveiled many things in WWDC 2013. The company rolled out app for iOS, 11-inch and 13-inch MacBook Air, Mac Pro, OS X Mavericks and so on. Following previous year, it is expected that this year, Apple will also introduce us with many of its new as well as upcoming devices. It is to be noted here that, the WWDC logo sometimes give a clue as to what we can expect from Apple, but this year’s logo doesn’t seem to be giving much away. However, the activities of WWDC 2014 include:

Philip Schiller, Apple’s senior Vice President of Worldwide Marketing said, “We have the most amazing developer community in the world and have a great week planned for them. Every year the WWDC audience becomes more diverse, with developers from almost every discipline you can imagine and coming from every corner of the globe. We look forward to sharing with them our latest advances in iOS and OS X so they can create the next generation of great apps.”

Apple has announced that tickets are now available for WWDC 2014, which will take place in San Francisco from Monday 2 June through to 6 June. You can apply for a ticket right now, and applications will run through to 18:00 GMT on 7 April (next Monday). The main keynote speech by Tim Cook on 2 June will be streamed live through Apple’s website.

Evernote CEO Responds To Criticism, Promises A Number Of Improvements During 2014