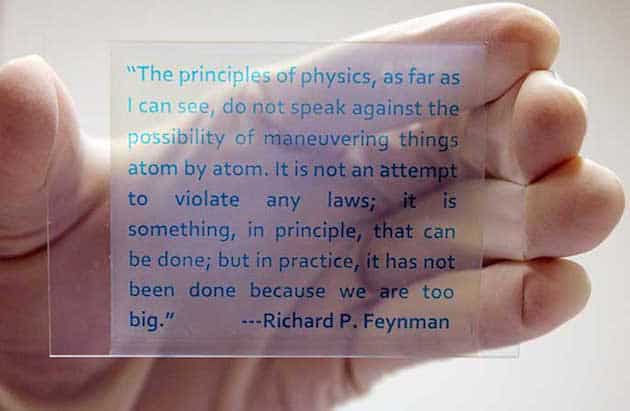 Chemists at the University of California Riverside have developed a new type of paper that is “rewritable” and can be erased and written on more than 20 times without any significant loss in resolution of contrast, which could solve paper wastage and environmental problems like deforestation. The rewritable paper comes in the form of a glass or plastic film, together with commercial chemicals called redox dyes as “ink”. The redox dyes in the film are made up of three primary colors – methylene blue, neutral red and acid green, together with titania nanocrystals (used as catalysts) and a thickening agent called hydrogen cellulose (HEC).

If you want to print some text onto the rewritable paper, you have to put printed letters onto another plastic film, and then use ultraviolet light to turn all parts of the dye invisible, except for the parts of the paper where the letters are to be printed. On the other hand, to erase the rewritable paper, the film will need to be heated to 115 degrees Celsius, which will turn the dye back from colorless to its original colored state in less than 10 minutes, thus creating a uniform block of color.

Yadong Yin, a professor of chemistry, whose lab led the research, said, “The printed letters remain legible with high resolution at ambient conditions for more than three days – long enough for practical applications such as reading newspapers. Better still, our rewritable paper is simple to make, has low production cost, low toxicity and low energy consumption. Even for this kind of paper, heating to 115 degrees Celsius poses no problem. In conventional laser printers, paper is already heated to 200 degrees Celsius in order to get toner particles to bond to the paper surface. This rewritable paper does not require additional inks for printing, making it both economically and environmentally viable. It represents an attractive alternative to regular paper in meeting the increasing global needs for sustainability and environmental conservation.”

At the moment, the paper remains legible at a high resolution. Now the chemists are tying to extend the legibility of printed texts or images on the rewritable paper, and also to get the paper to be erased and reused up to 100 times. The chemists have published their research, entitled Photocatalytic colour switching of redox dyes for ink-free light-printable rewritable paper in the journal Nature Communications.

Sources: University of California, Nature Communications
Thanks To: UPI