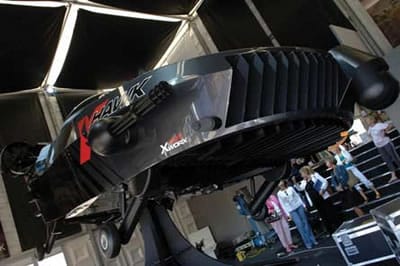 The AirMule is essentially a helicopter with the rotors on the inside, in the form of ducted fans. Aimed primarily at MedEvac use, it’s now been successfully tested, albeit at only two feet off the ground.

While previous attempts at fancraft have been almost impossible to control, Urban Aero says it has overcome this hurdle by using tilted slats to redirect airflow, rather than moving the rotor itself. As a result, says the company, it can remain stable even at wind speeds of 50 knots.

The AirMule is controlled through a four-channel, redundant flight control system that uses inertial measurements and GPS to monitor position and speed. Height above ground is measured by two laser altimeters.

Four hundred and sixty telemetry channels send real-time data to ground-based operators, who monitor the operation of the Turbomeca Arriel1 730 horsepower turbo-shaft engine as well as sub-systems.  These include the three gearboxes, the two main lift rotors with their hydraulic pitch change mechanism and three uplink and downlink communication channels.

The next phase of testing will take the AirMule a little higher from the ground.