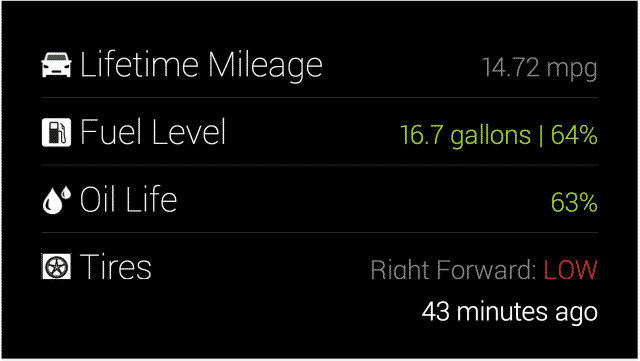 Have you ever wanted to know the fuel tank situation, the mileage details and other fine details of your car before you set off on the journey. A new Google Glass app, SmartDrive, can now do that for you by creating a real-time heads-up display of your car. The app has been developed by Brent Bovenzi and was showed off at the Disrupt SF Hackathon. According to Bovenzi, “You’ll see fuel mileage, how much gas you have left and tire pressure before even getting in the car.”

In gathering these details from the car and displaying them on your Google Glass, the SmartDrive app makes use of GM remote API. So if you wish to make use of this app, not only must you have a Google Glass of your own but you also need to own a GM car which can support it.

The event was the among the earliest coding events for Bovenzi, who has really enjoyed working on the app. Initially, the app started as the project of an entire team but along the way, other team members set out to create their own Google Glass apps. Bovenzi was the only one who continued working on SmartDrive till the very end and completed it.

According to him, ‘It’s a great opportunity to force us to do and to learn something. You’re not part of a big team, you’re not taking months to do it, and because of that, you have to force yourself.’

Siri May Be Coming Into Apple TV