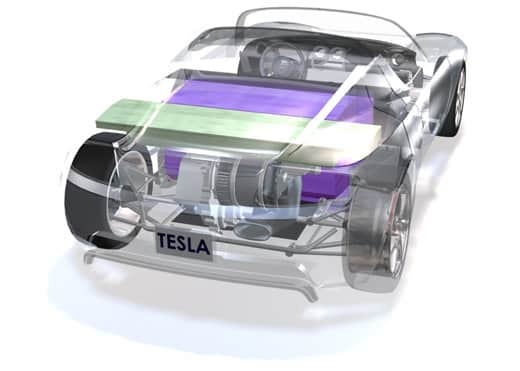 Tesla Motors and Panasonic announced that they will collaborate to develop next-generation battery cells for electric vehicles.

As Tesla continues on its commendable journey to surpass Ford, GM, Toyota and everyone else in total sales, it’s evidently hoping a tie-up with Panasonic will help it accomplish said goal. The two outfits have just agreed to work together in order to develop next-generation battery packs to be used within electric vehicles, which are based around “Nickel-based Lithium ion chemistry.” It sounds as if the two are hoping the collaborative effort will actually be mutually beneficial, though both have been coy about when or where this research will lead to implementable results. Hopefully we’ll end up with a Model S that can roll 724 miles on a single charge, but it’s not like we’d complain (much) if we only got 722. Tesla, the only carmaker producing highway-capable electric vehicles, will use Panasonic’s battery cells in their newest battery packs. The cells are comprised of Nickel-based Lithium ion chemistry, the highest energy density battery cells in production today, preferred by Tesla for EV applications because of their high capacity, light weight, durability, and long life.

Our collaboration with Panasonic will accelerate the development of next generation EV cells, enabling Tesla to further improve our battery pack performance. Combining Tesla’s rigorous cell testing and understanding of EV requirements with Panasonic’s cutting-edge battery technology will result in custom cells optimized for use in EVs.

In December, Panasonic announced the development of two new 18650-type (18 mm in diameter, 65 mm in height) high-capacity lithium-ion battery cells. The newly-developed high-capacity 3.4 Ah and 4.0 Ah lithium-ion battery cells have an improved nickel-based positive electrode (Panasonic’s proprietary positive electrode material based on LiNiO2, allowing for high capacity and durability). The 4.0 Ah cell uses a silicon-based alloy for the negative electrode instead of carbon, and offers a volumetric energy density of 800 Wh/L, compared to the 620 Wh/L in the current 2.9 Ah cells.(Earlier post.)

Being selected by Tesla to provide cells for their current and next- generation EV battery pack is a tremendous validation of Panasonic’s nickel-based chemistry and the extensive investments Panasonic continues to make in lithium ion R&D and production.

Tesla’s current battery strategy incorporates proprietary packaging using cells from multiple battery suppliers. This new cell will also be compatible with other cell form factors to enable the continuation of Tesla’s strategy of using cells from multiple suppliers. Tesla has already delivered more than 900 cars to customers in North America and Europe.