The tablet formerly known as the WePad.It coming on September with lot’s of differences.So we are wating for September………….. 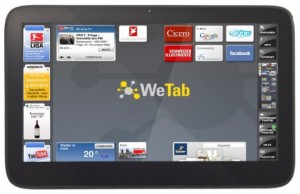 Neofonie’s recently-renamed Pine Trail-based and Android-running tablet, the WeTab, is apparently facing some development issues as Amazon.de has listed it as shipping from September 19, although previous official claims were of a July introduction, at least in Germany.

The company, which is part of the German telco Neofonie, said that it was changing its name to ‘clearly differentiate’ its products in the tablet marketplace. “As of today we have changed the product name of our tablet computer to Wetab,” it wrote.

WeTab, WePad — whatever name you use, it’s obvious that the gang at Neofonie doesn’t exactly run the tightest ship. (And yes, we’re still feeling a little stung from the product launch, where they tried to pass off Windows 7 as Linux.)

It might be a bit late to ‘differentiate’ the product, as the Wetab comes in options very similar to its former namesake-no-more. Although it doesn’t offer a 64GB version, Wetab is planning to release both WiFi and 3G versions of its tablet, and consumers will be able to opt for a 16GB or 32GB model.

But there are some significant differences. Wetab worked with Intel on the tablet as well as Adobe. Its gadget runs Flash as standard and has a 1.66GHz Intel Atom N450 Pineview-M processor.

The WeTab comes in two versions – one with 16GB of storage and WiFi, priced at 449 Euro, and one with 32GB of space, WiFi, 3G, GPS, a HDMI output and Full HD video capabilities (probably via a Broadcom chip) going for 569 Euro

This isn’t exactly the sort of thing that inspires confidence in pre-order customers, but who knows? Maybe some amusing behind-the-scenes drama is unfolding as we speak. You know how we love our schadenfreude.