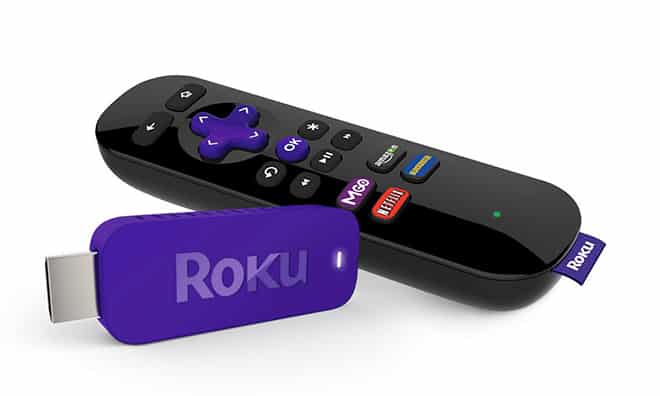 The Roku set-top box is one of our favorite streamers. However, last Tuesday, Roku Inc. announced the new Roku® Streaming Stick™ (HDMI® version), a tiny Roku player that gives consumers the easiest way to enjoy the best selection of streaming entertainment on TV. The new Roku Streaming Stick measures just 3.1 inches long and weighs less than an ounce, and comes with an included wand remote that’s larger than the device itself. The Roku Streaming Stick (HDMI version) features the compact stick design pioneered by Roku and plugs discreetly into an HDMI port for a streamlined look that’s ideal for wall-mounted TVs.

For the best TV experience, the entire household can use the included remote control to access the sleek Roku user interface with shortcuts* to movies, TV shows, news, the Roku Channel Store, Roku Search* and more. Users will be able to access to 1,200+ channels of movies, TV episodes, music, news, sports, kids’ shows and free programming streamed in up to 1080p HD video, plus a TV user interface featuring the beloved Roku Search.

Those who desire a mobile experience can use their smartphone or tablet (along with the free Roku apps for Android™ and iOS® devices) to browse and select channels to stream. They can also cast Netflix, YouTube and personal media from their devices to their TVs. Besides, over time Roku will add additional mobile features such as the ability to cast content from a computer to the TV.

However, the new Roku Streaming Stick (HDMI version) costs $49.99 and is available for pre-order from Roku’s own website as well as from Amazon, BestBuy, Target and from several other stores. It will ship to consumers and arrive in retails stores in April.