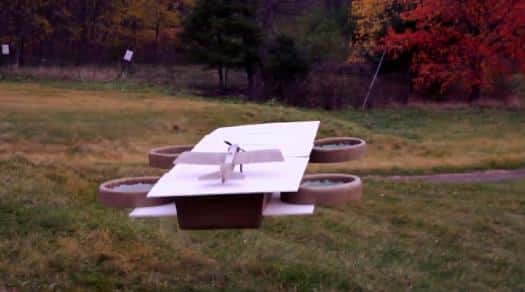 Flite Test has made “Helicarrier“, a drone with a platform (actually the platform is wings of the drone) from which other drones will be able to take off. Both drones can be operated via remote control. The drone is less stylized but more functional. The carrier looks like a modified quadcopter, with four rotors balanced two to a side along its rectangular length. It hovers a few feet of the ground, before a very small drone takes flight, dipping a little as it falls off the end before flying around towards the camera. It’s a neat feat, and one that’s probably confined to toy robots for now. Here’s a video where you see a drone aircraft carrier takes off into the sky with another drone on top of it and then, the second drone takes off from the runway (wings of first drone) that is itself already flying.

It is to be noted here that this isn’t the first homemade remote control helicarrier. A hobbyist built a drone like this one in 2012, but that drone was not able to launch another drone.

How The First Day Went For Honda Asimo As Museum Guide? Not Good