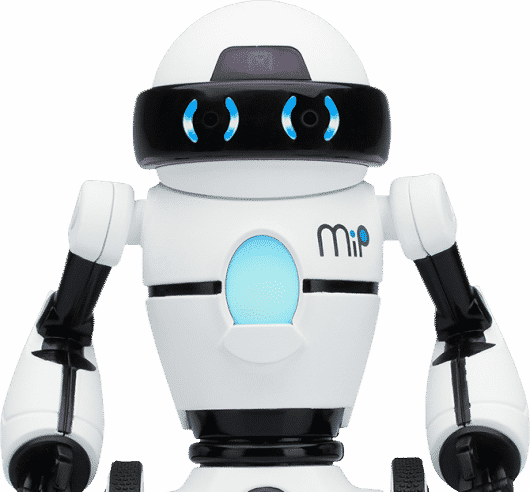 When it comes to robotics, it is difficult to find a nifty, affordable robot for an average consumer. Wowwee, which is well-known for making creative toy robots, aims to change this with its MiP toy robot, which rolls on wheel-bottoms and costs a mere $100. MiP robot balances itself on the wheels by making use of the mobile inverted pendulum. The method essentially makes use of constant to and fro motion of the bottom to keep the weight of the top body balanced.

This robot comes with both iOS and Android apps, which are free. These apps can be used to direct the robot and make use of the GestureSense system. As you perform gestures on your app, the robot’s 3D sensory system is able to recognize the system and correspond to them. It’s really a handy way of allowing a user to effectively control a robot without any extra effort. The apps offer an amazing variety of controls. You can, for instance, predefine the path which MiP will then follow or simply ask it to dance to a tune of your choice. Thanks to its sensory system, it is able to effectively determine the position of objects around it and avoid any collisions.

One can’t look past the fact that this is a toy robot and is, thus, meant for enthusiasts. However, it’s also probably the first time such a nifty piece of robotics is available for so affordable a price tag. Consumers within U.S. will have to cough up an additional $19 to have the robot shipped to their doorstep. MiP robot will be made available at Best Buy stores come May and it reminds us a bit of Philip K. Dick’s ‘Do Androids dream of electric sheep?’

Witness An Exciting Table Tennis Match Between A German Champion vs A Robot!

ESA Shows Off Robots Of The Future